The Many Lives of Yelena Moulin, Chapter 9

Glitter rained down upon her, caught like sparkling dust as it descended through the colored layers of light.

The rest of the room was lit by black light, which made the massive, vine-covered columns on either side of her glow florescent green, like surrogate phalluses fusing the classical with the vegetative.

Her translucent holographic costume glowed. Around its revealing, Cleopatra-influenced design, topped by an enormous crown-like headdress, coiled a large holographic snake, licking the air with its tongue.

She could not see the people filling the room around her, but she could hear them, smell them, sense their worship. Arms reached over the stage, straining vainly to be closer.

Slowly, Yelena Moulin lifted her arms towards the descending light. As if this were her apotheosis.

Around the entire club floor, a dozen holofeed walls echoed three-dimensional close-ups of her face, framed by her upstretched hands. The contours of her cheeks were soaked in light. Her eyes wide open but blinded by the glare of her own divinity.

“Welcome!” she screamed. “To Bikini Atoll!”

“Now!” she shouted, throwing her arms wide as if embracing the entire room. Her costume disappeared, except for the snake. “Who wants to fuck?”

“I need cock!” she screamed, thrusting her shoulders forward on the final syllable, making her breasts swing forward.

She fell to her knees and began to grind her hips, as if riding someone. Her mouth gaped lustily. The crowd loved it.

She stopped and put her right hand on her right shoulder, then uncoiled the arm and pointed into the crowd. She curled back her index finger, beckoning.

The snake wrapped around her hissed and showed its fangs.

A young man, perfectly average-looking, pulled himself onto the stage and promptly stumbled, drunk and stoned and perhaps shocked to be chosen.

His selection had nothing to do with merit. To pretend otherwise would insult the proceedings. The more average he was, the more nothing, the better.

This wasn’t about attraction. It wasn’t even about lust. At least, not hers.

This was about debasement. About the juicy celebrity scandal, first co-opted and embraced by its subject, then further transmuted into ritual.

Because the only thing more enjoyable than our idols is bringing them down into the mud. This pattern once marked the transition from one pantheon to the next. Now, it could be repeated endlessly, a rise and fall and rise again timed to circadian rhythms.

Only in so doing could Yelena become truly immortal. Because unless you enjoy the mud, it puts an end to you.

Only by embracing humiliation can you deny its power.

Only by shaming yourself can you establish that no one has the power to shame you. If they try, they can only make you stronger. Because you’ve already made shame part of your story. It’s no dethroning, no castration. Shame, you own it already.

No, for Yelena, this wasn’t about attraction. It was a philosophical statement.

A self-proclamation of Yelena Moulin as a new species of goddess, one adapted to the technology of observation and communication that had put an end to the comfortable illusion of privacy.

To hold onto shame in this environment could only paralyze. But to embrace it so proudly was to offer a psychological solution. No wonder Yelena Moulin was popular.

She understood this intuitively. It was an understanding implicit in the grace of her movements. In her naked hips. In her parted, kneeling legs, reproduced throughout the club like enormous moving statues, slivers of some colossal Aphrodite, the rest of which had long since been lost.

She embraced being Yelena Moulin so completely.

Even Yelena, watching her other self again from the latex couch, could not help but be impressed at the perfection she had brought to her final performance.

But she felt the oddest sense of jamais vu. Of watching a recording of another life, an alternate life, one close to her own but not hers.

Several hours and twenty years before this recording was made, the two Yelenas had gone their separate ways, and now this other Yelena lived only framed by brick on the holofeed wall Mr. Pollard had installed, at her counterpart’s request, above the flickering digital fireplace.

Yelena, viewing, could not help but feel both jealousy and pity. Jealousy because she remembered such fame as if it were hers, although it was no longer, if ever it had been. Pity because she knew this perfect Yelena Moulin, kneeling and grinding beneath the colored lights, had herself been only the public persona of that other, alternate Yelena, whose fear and sadness had been only her own. That private Yelena survived not in her many once-famous holovids but in her other historic recordings, such as the Yelena who sat weeping on the latex couch.

“Let’s christen the place!” Yelena Moulin exclaimed, nude and on her knees before the world, as a snake made of light coiled around her breasts, unable to touch them.

The young man, dizzy from booze and drugs, stepped before her and shielded his eyes from the colored light. A blue light, then a red, illuminated his flattened hand.

Yelena Moulin licked her lips and the snake flicked its tongue, almost in perfect sync.

She began to unfasten his pants. Disoriented, he rocked on his feet.

Above the chanting crowd, a howl. A scream, mad and panicked and utterly unlike the other screams of riotous celebration and joy.

Recognition swept the crowd in waves, as people took their cues from one other. Shouts of alarm mixed with silent curiosity and even continued chanting, sometimes from people standing side by side.

Yelena whisked down the man’s pants, exposing his half-flaccid penis. Neither of them seemed to recognize yet.

In the back, people began to run. Something in their brains went mad, and they pushed and fell and screamed for help that didn’t come.

On stage, the man with his dick out turned toward the commotion, shielding his eyes. He twisted and stumbled over his pants. His left arm flailed awkwardly as he collapsed, hitting Yelena Moulin’s shoulder on his way down.

Yelena grabbed her shoulder, reaching right through the snake. Still on her knees, she turned to the crowd. Recognition hit her.

A hole appeared above one of her nipples. She rocked on her knees, then looked down with a confused expression. A gush of blood colored her nipple red.

The only people left in the crowd were the cowering and the trampled and Mira Mira. Her blue face and hands stuck out of a thick, unfashionable winter jacket as she stood just off the stage. The tiny pink gun looked like a toy in her visibly shaking hand.

When she spoke, her voice wavered like she was crying.

On stage, Yelena Moulin, still on her knees, touched her breast, then stared curiously at her blood-stained fingers.

The man on stage had slid backwards, a few feet out of the way.

Staring at her fingers, Yelena suddenly smiled widely and confidently turned her fingers outward to the crowd that was no longer there.

She was smiling and chuckling, utterly convinced of her own words.

The man on stage nodded his head, as if hypnotized.

Mira Mira’s arm shook violently. Any bloodlust or adrenaline had fled her. She dropped her gun.

The snake slithered on Yelena’s shoulders.

Whoever was operating the holofeed walls lost focus on Yelena, leaving only her blood-stained hand. Reaching out in a dozen spaces across the club.

Blood gushed from Yelena’s wound. Her head slumped drowsily, and she lay down on the stage, making a pillow of her hands, as if taking a nap.

The man on stage stared at her, transfixed.

Mira Mira wrapped her arms around herself, like she were hugging herself, trying to get warm.

A security guard rushed across the floor and tackled the blue child. 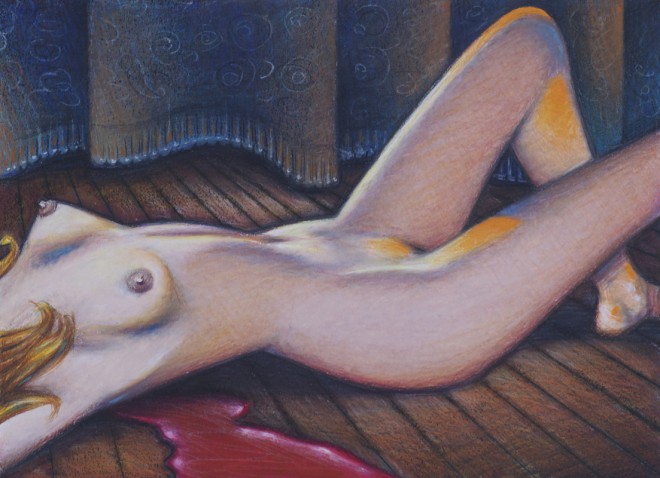 She’d watched the holofeed many times already. She would still watch it more.

Her death had been the oddest mixture of the banal and the transcendent.

No one could doubt her abilities as a performer. Nor the impressively over-the-top staging.

For those interested in seeing signs, her final words felt resonant, an emblem for the cultural moment, in which not only celebrity but life itself felt insubstantial as light. Yet people still reached for connection, as Yelena had raised her dying hand to a frightened, fleeing club.

Of course, she had been doing and saying nothing of the sort. Her confused and dying brain had simply latched onto an explanation, however implausible, out of a desperate belief that everything was in fact fine. What horror, to have died in such confusion, to have had one’s brain deprive itself of one’s final cognitive experience, the fear and foreknowledge of which had defined so much in life.

How senseless. Yet how quintessentially human.

Here was the real metaphor, for those willing to see it. Here was the substance, beyond the apparent declaration that all was only light, beyond the willful ignorance required to interpret a hand outstretched in shock as one yearning for contact.

Yet how contagious that shroud of shock, of willful denial, had been. Even the man on stage had denied the truth, despite being its closest witness.

And Mira Mira, spiteful and jealous assassin, straining to play her part in Yelena’s final, half-improved performance, her last bit of confidence stripped by the mundane and unsatisfying display.

She had not waltzed coolly towards the stage, uttered some immortal declaration, and destroyed Yelena Moulin.

Any plan she had in her mind, any mental rehearsal she had prepared, had collapsed beneath the weight of the moment.

Leaving her so transparently, so obviously, a confused and fearful child, in shock herself. Holding herself, warming herself, amidst the carnage she had caused.

Even Yelena could not fail to notice. She’d reeled in horror at her own death, at the sadness of this dying animal, confused until the last. She’d cursed that “fucking Mira Mira” and tried with all her might to hate the girl, to place the blame and therefore make everything crisp and clear and easy. She’d even succeeded, for a time, in dismissing any notice of her assassin’s vulnerability by means of angry thoughts.

But by the tenth viewing, the twelfth, the twentieth, it was no longer merely for herself that she wept. Nor merely for the assassin Mira Mira. But for the sad and distant fullness of things.

The tragedy was no longer hers alone.

Yelena raised her legs onto the latex couch and rocked herself in her skinsuit arms.