The Many Lives of Yelena Moulin, Chapter 5

Yelena felt the latex surface of the couch beneath her.

This shouldn’t be happening. I shouldn’t have any weight.

She knew full well she had no skin or nerves to feel through.

She reached out and pressed her finger nervously into the arm of the couch.

For a moment, she thought she was the original Yelena Moulin. Having died and ascended into a higher level of simulated reality. But she remembered talking with her mother moments before. And being a ghost, intangible.

Still, when she breathed, she could feel the air inside her. She’d been prepared to one day realize she wasn’t breathing air. But she had no model for this.

Around her, two other latex couches sat grouped around a brick hearth, in which a retro chic digital fire deliberately flickered to indicate its artificiality. The large room with high ceilings suggested wealth rivaling her own in life. Long stone bar in the corner. Far wall made entirely of glass, in three massive, outward-sloping panes.

Yelena went to look out. The house seemed perched alone atop snowy mountains, like the winter Alps. The morning sun felt warm on her skin.

She realized she was wearing different clothes than while talking to her mother. They were the kind she wore when performing, but she didn’t recognize them.

The woman, Yelena’s age, wore pajama bottoms but no top, and she walked like she lived there.

“A plastini should calm your nerves,” the topless woman declared. She went behind the bar, and Yelena watched silently as the woman shook the alcohol with ice, then drained it into a martini glass.

From this, Yelena knew the woman couldn’t be the house’s owner. Human bartenders were a luxury, but the rich would never deign to study the art themselves.

“Drink up.” The woman handed Yelena the glass. “It’s supposed to be your favorite. I’ll get Mr. Pollard.” And the woman strode from the room.

Yelena stood, sipping her drink and appreciating the view. The mountain snow glowed in the bright, warm sun. The shards of ice in her glass made tiny ripples in the green drink as they melted. It tasted divine, but anything would have. 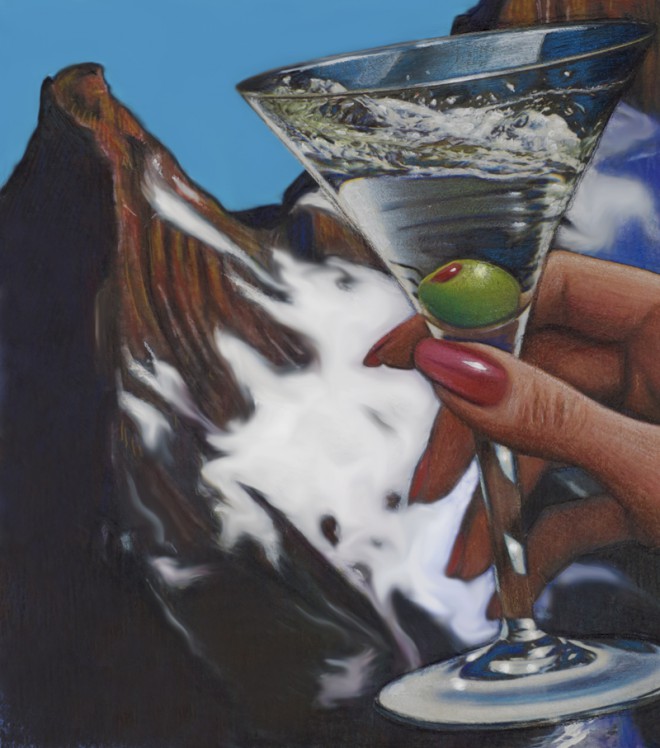 A Caucasian man in his early thirties entered, dressed only in a towel, and immediately went behind the bar.

“I’ll answer all your questions,” he called across the room to her. “But first thing’s first.”

He poured himself a glass of wine, then sat on one of the latex couches, reclining comfortably. He drank before waving for her to join him.

Yelena sat on the edge of the adjacent couch, her back straight, her posture nervous. She drank in punctuated gulps.

“My name is Vegas Pollard. But you’re wondering why you can touch things. I’m sorry to say, you haven’t been restored to life. You’re in a skinsuit. Do you know what that is?”

Yelena shook her head and took another gulp.

Yelena looked at her hands. She felt the latex couch beneath her. “This isn’t a dronesuit.”

“No, it’s got organic skin and nerves wrapped around it. Living tissue. But it’s got the same consciousness unit underneath.”

Yelena instinctively felt the side of her head, as if absurdly trying to feel what was inside. It felt normal. Or what normal felt like, before she became a ghost.

“You’re saying this is a dronesuit. With real skin.” She felt her face. “With real lips. Real eyes.”

“‘Organic’ would be more precise.”

“And my resurrection record, it’s inside this dronesuit? Like a soldier.”

Mr. Pollard nodded and took a drink from his wine.

“How long have I been dead?”

“Almost twenty years. I grew up with you. With your holofeed, I should say. You were always my favorite. And now I’ve brought you back.”

“Does the world remember me?”

“Don’t feel bad. No one remembers anything from a year ago, let alone twenty years.”

“How did you get my resurrection record?”

“You sold a lot of copies after your death. Millions. But don’t worry. I got a fresh copy, unpolluted by whatever all those owners did to you.”

“You can’t count on all of them respecting your psychology. Ghosts never did have any formal rights. And the people buying you, a lot of them were new to resurrection records. Fans who didn’t know what they were doing. A lot of them treated you like property. Even tinkered with your code.  I’m afraid they set back the ghost rights movement. But the horror stories also led to a backlash that helped create ghost rights legislation.”

The thought of living out millions of lives, some in horrible conditions, momentarily horrified Yelena. But then she realized that these lives hadn’t been hers, only copies of her. Like the original that had presumably ascended the stacks. Or a million twin sisters she’d never know but who wouldn’t have existed, were it not for the same dissemination of her program that allowed their abuse.

“Where are they now?” she asked.

“A lot were simply deactivated. Some live on in VR simulations. Retirement communities for forgotten ghosts, set up by ghost rights extremists. A few might even still be in operation. But they, at least, have rights. They’re still property. They can be deactivated or confined. But they can’t be abused. Like animals.”

“And I have these same rights?”

“So why bring me back? Again?”

Mr. Pollard stretched his arm along the couch, as if reaching towards the distant sun.

“It was my therapist’s idea. I have problems relating to women.” He rolled his eyes. “Or so he says. Nothing terrible, but… he thought it would be a good idea. I had a crush on you as a boy.” He paused. “It’s funny. You seemed so much older than me then, and now you just look like a kid.”

His eyes widened. “I thought I did. I guess you were my picture of a woman. Of everything a woman could be. It’s stupid. I remember when you died. But that was a long time ago. I was a kid. And you were a sex symbol. Why do you think you sold so well? It’s no surprise you were abused.”

Yelena wondered how many of her duplicates, before the advent of skinsuits, were put into simulations and raped.

She leaned back against the couch, distancing herself.

“I hope you’re not expecting to have sex with me. I hope that’s not why you put me in this body.”

“It would probably be good for my therapy. But don’t worry. I can take no for an answer. The whole point of this exercise is to learn to relate to women better. I wouldn’t be doing myself any favors by ignoring your rights.”

“I suppose, when your little therapy’s over – like if I do have sex with you – you’ll probably turn me off anyway. Because you’re through with me.”

“These are some great rights I have. I suppose I can’t leave, either.”

“I’m afraid not. Your skinsuit will shut down automatically if you get too far from the house. And I really hope it doesn’t need to be said, but you won’t be able to hurt me either. The consciousness unit has overrides. And if that doesn’t work, I know your safeword.”

“Only your skinsuit. You’d still be conscious. Merely paralyzed. That way you can be told what you did wrong.”

“Or you can do things to me and I’ll feel them, right?”

“It’s not like that, I assure you. I have no plans to rape you.”

“I can’t imagine why the girls don’t love you.”

Mr. Pollard swallowed the rest of his drink. “Well, hasn’t this been delightful? Make yourself at home. I’ve got to earn the money that let me grant you life.” He stood up. “You’re welcome, by the way.”

“Tried and convicted. Everyone followed the trial feeds. But she was a minor. Driven insane by the pressures of celebrity. Or so she claimed.” He resumed walking, then added, “She should be out of prison by now.”

“At least I’m finally younger than her.”

“Not necessarily,” he explained, stopping almost at the door. “She sold her resurrection record to help pay for her defense. Only the second celebrity to do so. After you, of course. Only she did it the smart way – she didn’t wait until death. I’m sure a lot of the families that bought your record bought hers too. The early celebrity collectors.”