The Many Lives of Yelena Moulin, Chapter 8 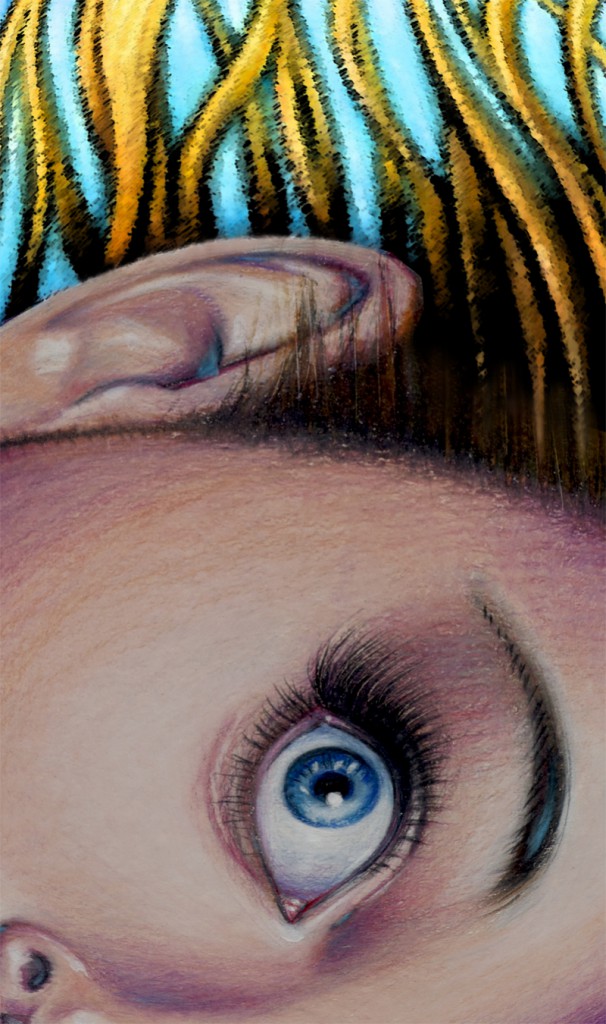 The hardest thing about spending days underwater was keeping the mind busy.

The only light came from the distant hallway, dimly lit with no one present, reflected through the pool room’s double glass door.

In front of her, the water’s surface seemed so intricate and alive. Though dark overhead, slivers of light appeared and disappeared as she watched, growing in intensity as they neared the glass door. Without them, she realized, she would have lost all sense of direction, or even a sense of her place within the pool.

The only sounds were the water lapping gently in her ears and the hum of the jets, mixing and cleaning the dark world around her.

Her naked skin felt cold. She felt it most in her fingertips, in her nipples, in her sex.

She wondered if her mind could still hallucinate, deprived of sensory input, or if this was a function of the brain that had not been duplicated. She didn’t think she’d hallucinated so far. She wondered if she’d know.

She wondered if her skinsuit could be damaged, if it was designed to remain underwater for so long. No one had told her, one way or the other, leaving her to experiment with her body.

Which, when she thought about it, was no different from anyone.

Three days before, Yelena swam, nude, alone in the huge pool, as she did every day in the bowels of the house that seemed so empty.

But on this day, Veronique had interrupted.

“It’s already been weeks. Mr. Pollard’s patience is not infinite. Nor is his request to talk unreasonable, given the circumstances.”

“Nor were mine. Given the circumstances.”

“He won’t give in to demands. You don’t know him.”

“I know you’re ungrateful. And a computer copy of a particularly spoiled bitch.”

“It’s really none of your business.”

“Then you’re not doing a very good job.”

“If you continue to refuse,” warned Veronique, “I’ll be forced to shut you off.”

“Then shut me off. In the meantime, I’m exercising.”

But Yelena didn’t care. The water felt good on her body, even if that body wasn’t really hers. She dove again, this time all the way to the bottom of the deep end, thirty feet down.

The skinsuit wasn’t quite as buoyant as a human body, although it wasn’t far off. Its strength more than compensated, allowing Yelena to whip herself through the water.

It didn’t need to breathe either. It took air in and out, but only to better replicate the human experience. Once Yelena got over the panicked feeling that she needed to take a breath, she could remain underwater forever.

And she intended to, as long as Veronique waited. The assistant had chores, responsibilities that would doom her in this private waiting game.

While Veronique watched, Yelena did handstands on the bottom of the pool. Then she swam along the bottom, inspecting its sloping surface, from thirty feet down to only a few feet deep.

She could still see Veronique standing angrily, arms crossed, near the pool’s edge. So she did underwater laps, trying one stroke and another, never looking up.

This is what Yelena Moulin did with her resurrection. Especially now that she was on strike. She swam. For hours every day. In Mr. Pollard’s beautiful indoor pool.

It was a different life than her old one. A slower, more isolated one. But not without its pleasures, once one decided to explore them.

Fifteen minutes after she’d surfaced last, she checked again for Veronique. Not seeing her, she kicked herself back up to the air, around the center of the pool.

“Bikini Atoll,” said a voice from the corner of the room.

Yelena’s limbs froze mid-stroke. She drifted backwards, still afloat but with only her face above water. Her eyes darted back and forth, and then the water lapped over them and swallowed her face.

Slowly, terribly slowly, she drifted to the bottom.

She landed on her shoulders, then settled on her back, her arms and legs comically extended, fixed in a gesture no one would make on the bottom of a pool. She looked like an shelled animal on its back, trying to flip itself over but having no idea how to do so.

Veronique stared down into the pool.

“Fuck,” she said to herself.

The room’s lights turned themselves off not long after, and then she was left only with the minimal, constant light of the hallway beyond.

Yelena had no way of marking time. But it was three days later before the lights turned back on, ahead of someone approaching.

Her mind raced with anticipation. At last, a figure appeared at the water’s edge, and to Yelena’s surprise, it was not Veronique’s but Mr. Pollard’s, with Veronique following closely.

He had never been to the pool before, as far as Yelena knew.

He disappeared, returning a minute later. Not long after, she noticed that the surface of the water seemed to be dropping, lowering itself towards her.

It took almost half an hour to reach her. Mr. Pollard waited the entire time.

Her foot emerged first, and the air felt so terribly cold.

The water crept slowly down her limbs. The sight of it so close to her eyes seemed so absurd, after three days, especially with Mr. Pollard waiting, that she briefly wondered if she were hallucinating.

Then the water kissed her face and descended below her right ear, and Mr. Pollard said, “Bikini Atoll.”

She gasped for breath, though she didn’t need it, and immediately began to shiver, though her body probably had no need for it.

Still lying on her back, she yelled, “How long?”

“Three days,” he called down to her.

Standing again, she noticed that her limbs weren’t stiff, despite her fears. But the organic skin of her hands had wrinkled in the water, almost like real human hands might.

“How the fuck do you not notice that I’m at the bottom of a pool for three days?”

“I came as soon as I heard. She didn’t tell me until I came out to talk to you again.”

Holding herself for warmth, she walked to the shallow end and lifted herself up. Behind her, the water continued its retreat, a little aquatic wedge in the deep end of the enormous pool.

Veronique, hanging her head, handed her a towel, while Mr. Pollard stood close enough to show concern but not enough to touch.

“Are my rights as a ghost so limited that they’re not violated by keeping me paralyzed at the bottom of a pool for three days?”

“They are,” he said. “It was inexcusable. And she’ll be punished.”

“I don’t want her punished,” Yelena said, drying herself. “I want my freedom.”

“Once my psychiatrist is satisfied, yes.”

Yelena couldn’t help but smile. She’d won the strike. Attained at least a promise of her freedom, despite having nothing with which to fight.

Shit, she thought, if I knew it would be this easy, I’d have thrown myself into the pool weeks ago.