The Many Lives of Yelena Moulin, Chapter 6

In the early hours of the morning, before the sun had risen against the snow and the mountains outside the living room’s glass wall, Yelena knocked on Mr. Pollard’s door.

Veronique answered, clad as always only in pajama bottoms.

“But I’m bored. I don’t have to sleep anymore, in this fucking skinsuit, and I’m terribly, terribly bored.”

“It’s a big house. Find something. Take a swim. There’s an indoor pool.”

“I don’t have a bathing suit.”

“I told you he’s sleeping,” she said. “Now behave yourself, or I’ll be forced to shut you off.”

Through the door, she heard Veronique say “Bikini Atoll.”

The sun rose, and several hours later, Veronique, still dressed the same, opened the door again and gently shut it behind her.

It took Yelena a few seconds to realize she could move.

In the living room, Veronique was busy adjusting the latex couches, making them perfectly perpendicular to one another. Undoing any trace that Yelena lived there.

“I had all night to think about it,” Yelena announced, “and that’s a really fucking mean choice for a safeword.”

“It was your undoing in life. It seemed appropriate.”

“Bikini Atoll,” Veronique said dispassionately, without even looking up.

Yelena watched Veronique finish straightening. Then Veronique left the room, glancing at Yelena on the way out but saying nothing.

Yelena could still move her eyes, so she could watch the sun slowly descend over the mountains.

A few hours after nightfall, she heard Veronique’s voice speaking from the doorway behind her.

“We’re going to bed. We can talk tomorrow. I think Mr. Pollard will want to talk too, but I can’t promise anything. Bikini Atoll.”

As soon as she could move, Yelena tried to spin around, but she collapsed instead onto the floor. By the time she got to Mr. Pollard’s door, Veronique was already inside.

Through a double glass door in one of the lower levels, Yelena found the expansive pool. The entire room looked new – not only spotless, thanks no doubt to Veronique, but like it had never been used.

She took off her clothes and swam until that too felt boring. 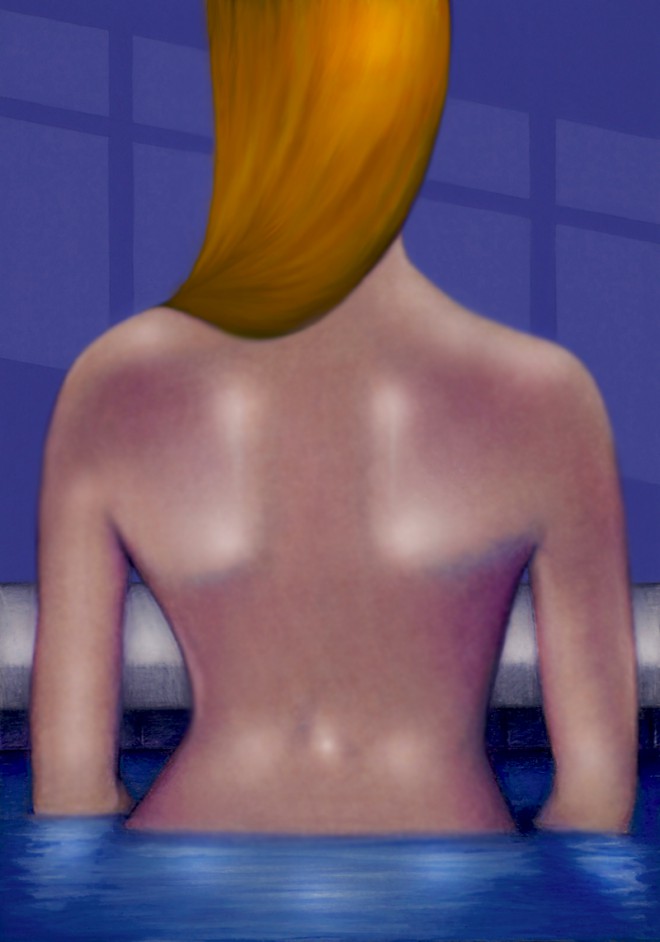 The blackness beyond the living room’s glass wall felt empty and alone.

In the morning, with nothing better to do, she went to the hallway outside Mr. Pollard’s door. She didn’t dare knock, so she sat instead.

It wasn’t until noon that Veronique emerged, wearing a different pair of pajama bottoms but still no top. Never a top.

Yelena rose and followed Veronique into the living room, where Mr. Pollard’s assistant sighed and started returning the furniture to its original configuration.

“Don’t do this again,” said Veronique as she pushed a latex couch from the glass wall towards the fireplace. “How many other rooms did you mess up like this?”

“Why bother? Mr. Pollard doesn’t even use this house. He only comes out of his room every few days.”

“Yes, but it’s his house, and he likes it to be orderly when he does use it. Speaking of which, don’t worry about being available. He’s staying in today.”

“What is it you two do in there?” Yelena asked. “Oh, I don’t mean the sex. Please, spare me the details. I mean all day.”

“Doesn’t he have any patients to see?”

“What did you think he’s doing all day?”

“But he’s locked in his room.”

“I forget you don’t know these things. Surgery’s all done remotely now. With holospace displays.”

“But he can’t be working all day. Even sleeping and fucking you can’t take that long. But he’s in there all day. And when he comes out, it’s only for an hour or two at a time, and that’s only to speak with me. To talk about his stupid fucking childhood. Why does he even own this house?”

“I suppose he likes having it. He’s a complicated man.”

Like he likes having you, Yelena thought. And me. Being an asshole’s not fucking complicated.

“Meanwhile,” said Yelena, “I’m bored out here. All day and all night.”

“You’re alive. And for all intents and purposes immortal, as long as you don’t displease Mr. Pollard. My advice: enjoy the big, stupid house he’s not using.”

“But it doesn’t even have a holofeed wall. That’s not exactly dripping wet.”

“Wow. You have no idea how cute you sound. Like an old holofeed. I don’t think anyone’s said ‘wet’ like that in twenty years.”

It wasn’t the first time Veronique had caught Yelena using outdated slang. All the expressions that had, until recently, made Yelena popular and trendy now suddenly made her seem older than Mr. Pollard. Which, of course, she was.

“So that’s a no on the holofeed wall?” Yelena asked.

“Yelena, no one’s used a wall to display a holofeed for fifteen years. They’re all immersive now. Or at least stand-free.”

Yelena’s eyes searched the walls and then the ceiling. “Where are the controls?”

“Only Mr. Pollard’s room has them, and they’re for work. Unfortunately, this house was built for relaxation and contemplation, not entertainment.”

“Entertainment is relaxation. So what am I supposed to do all day?”

“Almost every book or article ever written is available through holographic displays built into every table in this house.”

Yelena rolled her eyes. “That was quaint even in my time. No one actually reads those old things. People only have them to look snooty and superior. Do you have a VR interface?”

“Immersive holospaces have mostly done away with those.”

“This house was built as a retreat. It was designed on certain principles, such as the idea that too much technology gets in the way.”

My fucking luddite mother was right: I’ve died and gone to hell. And she designed it.

“And what,” asked Yelena, “would technology get in the way of?”

“And what, pray tell, would be fake human experience?”

She’s calling me a resurrection record in a dronesuit, thought Yelena. I’m a fucking celebrity, and I’m being insulted by the help.

But she wasn’t a celebrity anymore. Now she was help too.

Yelena had been prepared to one day find herself a ghost. She could adapt to having a body again. But she couldn’t adapt to feeling irrelevant.

“Don’t be defensive,” said Veronique. “I only meant what I said: I wouldn’t know. It’s Mr. Pollard’s philosophy, not mine. And I’m too busy to enjoy it. But that doesn’t mean you shouldn’t. A lot of people would pay a lot of money to own a house like this.”

“Yeah, but what is there to try? What do you fucking have to do here?”

“A view,” said Veronique, gesturing out towards the mountains. “Now if you’ll excuse me, I’ve got to fix the mess you’ve made of the rest of the house.”

Yelena didn’t follow when Veronique left the room. Instead, she went to the glass and stared out at the mountains. They looked so real and so solid. Everything she wasn’t.

“Bikini Atoll,” Yelena heard herself say. She hadn’t planned to say it.

And then she couldn’t move anymore.

It could be hours before Veronique found her and realized she wasn’t moving.

Yelena cursed her impulsivity. She felt some horrible, loathsome, self-destructive impulse that had always been there, gnawing just beneath her skin, keeping her from ever holding onto happiness.

And it terrified her.

Not because she’d paralyzed herself – that, she could dismiss as mere thoughtlessness or frustration or curiosity. Even realizing that she’d used against herself a tool, implanted inside her without her consent and intended as a form of punishment – that was merely masochistic. What terrified Yelena Moulin wasn’t this. It was the million times she’d probably expressed this same urge in subtle ways and not noticed it.

On the glass window, she saw tears on her reflected face and instinctively tried to wipe them.

At least she knew her tear ducts weren’t paralyzed. Probably because they were part of her eyes, although she guessed it was because the sadist who had programmed the safeword response preferred to be able to see the tears as his paralyzed victims were chastised or worse.

Still, she had to admit that the snow-capped landscape beyond her tears was beautiful.

Maybe she hadn’t been punishing herself. Or she was, but self-destruction can lead to new experiences too.

Because Veronique had told her to enjoy the house, but Yelena could never quiet herself enough to do so.

Because this tool of punishment she’d used against herself was also a tool of control.

What Yelena missed having, even more than her body or her life.

If she were going to get it back, to feel like Yelena Moulin again, she’d have to start by learning not to fear boredom or being shut off. And what better way to teach herself this than by doing it to herself?

To engineer a low point, from which to climb. To turn self-destruction into self-creation.

She’d been flailing. Raging, when she needed to focus.

Because she’d been too attached to this new life, oddly more so even than her actual one.

And why? Because she would die when she died, instead of ascending the stacks? Because Mr. Pollard might simply delete her, the way Mommy had Dad?

It was still only a game. A performance. And Yelena Moulin knew how to perform. She could manoeuver people’s emotions as dispassionately as Veronique moved couches.

Caring, she reminded herself, never got anyone anywhere.

We all have so many needs, but no one ever loved a need, never felt anything but an opportunity to exploit or to pity.

And Mr. Pollard, he had a need too. If only to talk to her. It wasn’t much, but it was something. A wedge.

She only looked powerless.

In the glass, her tears had dried. All that was left was the snow and the mountains, stretched out beneath her like they always were.