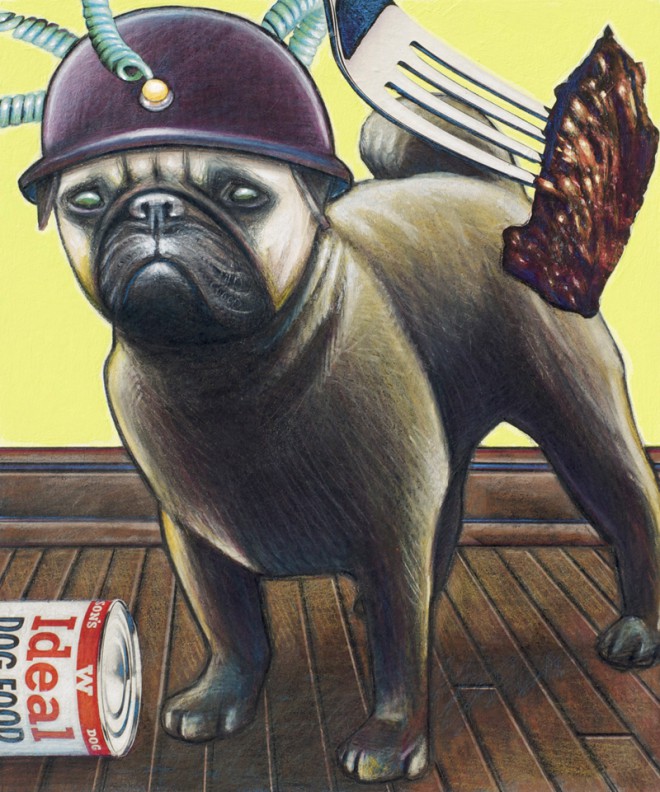 Wilbur lay on his side, his wrinkly face pressed into a padded black helmet. The helmet’s soft leather interior concealed a large array of electrodes. His long tongue hung from his mouth and appeared stuck to the floor, conveying drool down its length. He panted and occasionally snorted. His legs twitched, as if he were running in his dreams. Not far from where he lay, his water and food bowls sat replenished but ignored.

Standing at the nearby kitchen counter, Raul finely sliced lightly-seared cloned mastodon flesh and began tossing strips of the red meat into the salad he’d prepared.

Suddenly, the holofeed wall activated, blaring the electronic club music on one of Yelena’s feeds. It had detected her entrance. Half-awake and topless in her smartthread jeans, Yelena staggered to the kitchen island.

“Up by fifty, I see,” shouted Mrs. Ostermann as she turned down the holofeed. “My daughter the workhorse.”

“Up late partying, you mean.”

“I suppose getting fucked by two guys on the dance floor was just part of the job.”

“Actually, yes. But I didn’t hear you bitching when I bought you that ass.”

“The mother of a famous starlet should be forced to look her age like some common peasant?”

“Mom, can we try not starting the day with a fucking lecture?”

“Oh, certainly. And I’d like to try starting my day without a holovid like the one I saw this morning.”

“You’re the only one who saw it, thanks to fucking Mira Mira. All she has to do is flash those little pubescent neon titties, and everyone forgets I sucked off a stranger on a dance floor while some other guy nailed me from behind. I can’t even humiliate myself properly anymore.”

Raul turned away from slicing mastodon and stared contemplatively at Yelena. “Slut, maybe you need to change it up.” Waving the knife back and forth in the air, he said, “No offense, but Caucasian skin, blond hair, blue eyes, big tits? It’s all so retro. Ya know?”

Yelena glanced over at Wilbur, still twitching on his side near his dog bowls. “Mom, get Wilbur.”

Mrs. Ostermann hesitated, then bent over and pulled Wilbur from his helmet. As she lifted the pug, he whined and pedaled his legs against her arm, trying to get back to the device.

“This dog is a fucking addict,” said Mrs. Ostermann. “Too much VR’s not good for anyone.”

Taking the dog from her mother’s hands, Yelena began to caress him.

“It’s Yelena, Mom. Has been since my holoporn.”

You said that just to anger her, Yelena told herself.

“Yelena, you know perfectly well that neither quantum resolution problems nor the VR hypothesis, even if proven true, disproves God in the slightest.”

“You can’t fucking call it a hypothesis anymore, Mom. It’s not a fucking hypothesis except to fanatics like you.”

“That’s called the Theists’ Contortions, mother. You twist reality to fit these ancient, bullshit ideas. And then you fucking object to VR.”

“You don’t respect my beliefs.”

“We’ve been over this, mother. Everyone knows there’s no god. It’s proven. You die and you ascend the stacks.”

“Who the fuck knows? But I won’t make it up or believe some fairy tale just to feel like I have some fucking answer.”

“Lunch is served, darlings,” announced Raul, pirouetting to place two plates on the kitchen island, setting utensils and napkins beside them. “Salad à la mastodon.” The thin strips of raw meat fanned out over the vegetables, cherry tomatoes accenting the mastodon red.

From Yelena’s lap, Wilbur strained to get onto the island to eat the salad, but Yelena set him on the floor.

“I’ll pray for you,” said Mrs. Ostermann, taking the fork in her hand.

On the blaring holovid, another feed was showing clips from Mira Mira’s breast augmentation.

“Grow the fuck up, Mom. Your God is bullshit. Disproven. Banished from serious public discussion.  He done got good and fucked in the ass.”

“Now that’s a God I could really get behind,” volunteered Raul.

“What do you think, Raul?” Mrs. Ostermann asked. “About God?”

“Madam, I am a devout hedonist.”

“So you think you’ll ascend the stacks when you die?”

“I assume so. But if I don’t, if science is utterly wrong, I don’t presume to have any idea what would occur. And neither, I presume, does anyone else. Therefore, I’m better off living the one life I decidedly do have to the absolute fullest.”

“Mom, could I just please eat in peace? I’ve got nothing in my stomach but booze and drugs and semen, and I’m starving.”

Mrs. Ostermann stood and began to walk away. She turned and gestured like she was about to say something, then walked out of the room instead.

“Give her salad to Wilbur,” Yelena told Raul. She looked down at her feet, but Wilbur was no longer waiting for mastodon meat.

He was already back on his side, plugged into his little leather VR helmet.

Only now his red penis was unsheathed, his back feet humping away.