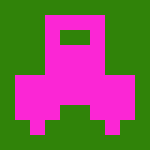 She can see it bruise the horizon, then erupt – like a mother striking a daughter, like the electricity between the surfaces of her palms, or between two women repelled. The storm rears, poised to… [more]