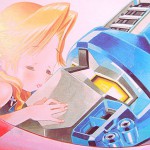 Did you know that the beloved leader of the Autobots had a fetish for underage girls? Or that a Megatron look-alike not only shared the same fetish, but repeatedly tried to rape those girls? Or that… [more]