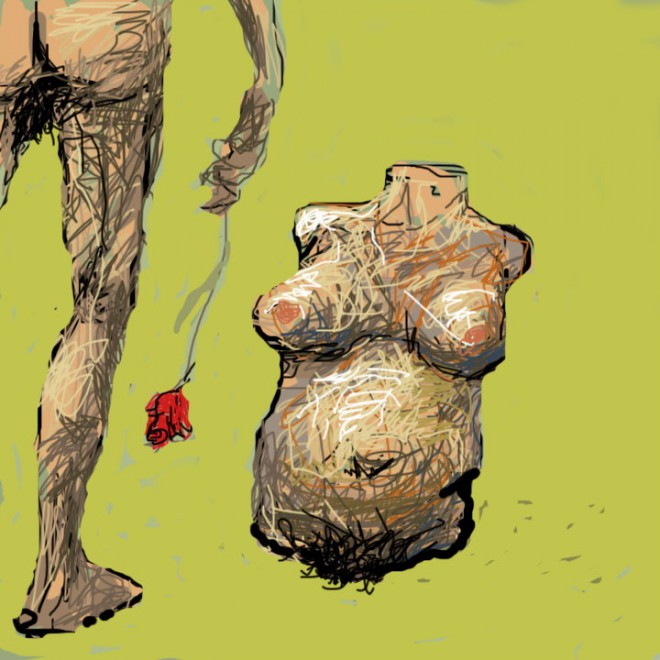 Jim grappled with his cock, imagining himself transforming into pixels as he thrust it into the image of a woman’s vagina. A mind beyond his penis insisted this could happen. It was the same mind that assured him that a man could become his true self by fucking himself dry. The pride of sex would replace the shame of masturbation and he would regenerate. This prayer haunted Jim whenever he noticed his penis. Genitals are our true names. Our secret names. Our second faces. And yet this sort of unrestrained fantasy fuck was a form of cruelty. Jim knew he was objectifying women and sex. The guilt was a wound, just as isolation was a wound. He supposed that a healthy social life involved finding those willing to give him sex or money—not just finding those who dulled the sharpness of loneliness. There was too much risk. Feelings would be hurt, lovers might feel betrayed. Business associates might feel mislead. To Jim, what was considered healthy, he considered morally corrosive. Every time he masturbated, Jim felt the potential he had disappear. There was no point is showering, brushing teeth, picking up after himself. He was a mouth with a penis spout and when he wasn’t consuming, he was excreting. Only God could save him from himself.

As best of the second best, also ran, first place loser, Jim was—as his uncle often said before writing him yet another check—the jester who wishes he was the general. When he considered the golden pen-holder and cherry wood desk at his uncle’s office, he recognized
it as a place of power. From Jim’s uncle’s desk, power flowed in the form of loans he never repaid. When Jim was younger, he thought his uncle helped him out of a sense of vicarious indulgence—to live the ’artistic’ life that a fund manager could not. At some point in his thirties, Jim realized his uncle enjoyed stuffing the bills of cash in his baby bird beak. His uncle purchased Jim’s pride and lined his office with it. Photographs of Jim and other family members featured prominently on the walls next to his uncle’s gilded diplomas. On more than one occasion, Jim’s uncle would make the rounds in the office and a look of mocking recognition would appear on the faces of his uncle’s colleagues. “You’re Jim? That’s great! You’re hilarious! Say something funny!” Jim’s office by comparison was strewn with piles of incomplete paperwork, misfiled cables and tools, two partially disassembled computers, stacks of books, food wrappers, receipts, bills, tickets, bus transfers and power cords. At the center of the mess, atop a shaky wooden desk, his computer dominated; an altar to his sexual appetite. Below the desk on the floor, a trash bin held the tissue-paper evidence of his jack-off sessions. These were Jim’s co-workers. They laughed at him too.

Before dawn, Jim awoke to songbirds arguing with crows. Nature was a foul thing. What disgusting drive permitted crows to eat carrion? The same one that forced him to the office once a week. He groaned when he looked at the clock: it was nearly two hours before he needed to get up. Reaching to pull the covers back on, his hand grazed across something warm and unfamiliar. In another moment, Jim’s penis went hard: it was a woman’s nude ass. Another dream. Sometimes it was difficult to distinguish the waking world from the dreaming one—even his unconscious mind had become mediocre. Whose ass? How did she get in? He must have forgotten to lock the door last night. He’d heard of drunk people mistaking another person’s house for their own. He pulled the covers off the bed. It was a young woman’s torso. It seemed created without legs arms or head and had no stumps; it was just a woman’s torso, covered in smooth skin. Like the Venus De Milo, but even less. It was perverted to even imagine such a thing.

At the coffeeshop near his office, Jim watched the workers scurry past on the way to work; all brown boots and gray overcoats. Rain rinsed the filth off the sidewalks and Jim hoped it would do the same for his mind. He imagined the sound on the other side of the cafe window: of clicking heels running through the rain, shrieking-laughter of young women running through the downpour. He tried to imagine them naked. Tried to see through their coats to visualize their pelvises. He tried the game with men. Imagined huge penises on small men and tiny cocks on huge men. Did women have the same sorts of dreams of symbolic dismemberment of the male body? Something more gentle than dick amputation? Or would even a sexual fantasy like that be the ownership of the castrated male? It was the damnedest dream! He couldn’t really recall waking up. This happened to him once in a while, he would sleepwalk his way to work—sleep through work. His sleeping and waking mind were banal—Jim’s conscious attendance wasn’t even required.

The more he thought about it, the more he found the dream disturbing. In college, he studied feminism. He could see a direct connection between the pornographic fetishization he had for pussy and the way psychos would go and cut up women to fuck their dead pelvises. And he was well aware of how this all went back to fashion magazines and mass media and porn. This was a sexy vision of a dismembered female body. A living dismembered body. This was why the dream was so appealing. It wasn’t even a person. It replaced people. No feelings to hurt. No irrational attachments. It would be the same as being alone, but with sex. How many men dream of this? The guilt made him hard.

Before leaving for the day, Jim’s boss told him he could see a change his in attitude. “Keep it up.” Jim smiled and pretended to work until the cleaning crew arrived. Was it a dream? Was he still asleep right now? When Jim finally returned home, he couldn’t even look in his bedroom. He hung his office clothes in the bathroom and took a long shower. Satisfied that the work day was finally over, he returned to his bed and laid himself down. He didn’t dare look to the other half of the bed until he had let the stress of ringing phones and sweat mixed with cheap deodorant escape. Was it possible that even a piece of garbage like Jim—was it even possible for his life to get better? He looked at the pile of blankets on the other side of the bed and continued to delay revelation. What would it mean if it was real? What would replace this bitterness within him?

Acquaintances commented on Jim’s improved demeanor. He lost weight, dressed better, cleaned his house and worked harder. The only care his ’wife’ (as he called it to himself) seemed to need was a daily shower or bath. It didn’t seem to eat or defecate or get pregnant. It seemed to always be aroused when he was around and had an unlimited sexual appetite. Was this proof that God existed? The Devil? Was this a test of his moral character? Where did the torso come from? Did it belong to someone? When a man’s happiness is dependent upon a mystery, he ignores the quest for answers. He knew enough to feel guilty. From the moment he had seen it, he’d known he’d transgressed. It was the prayer. His prayer had been answered. It seemed so innocent, such a momentary thing. He hadn’t bargained for it—it just was. The purpose of its existence was to please him. He knew that if he wished to impregnate it, it would swell and issue a child like them both. He knew as he was inside it that this was the only thing that mattered: this orgasm, this connection of the two halves. We become our mates, become our children. Jim closed his eyes, concentrated on himself, the future, and released himself. 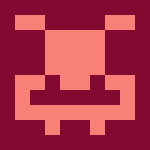 AJ Lee has been writing for over 20 years. He placed finalist in the Marin Poetry Center's contest in 1993 and in the San Francisco Bay Guardian Poetry contest in 1994. 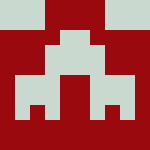 Seann Patrick McCollum has self-published ten books of poetry, with another two due later this year. As should be apparent, he is slightly obsessive and a control freak but otherwise completely harmless. He stands five foot ten in his socks and is patiently waiting for this whole internet business to blow over. His work can be found at songoferyops.blogspot.com.