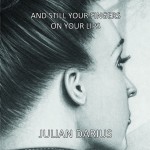 And Still Your Fingers on Your Lips

A cross section of the sharp young minds who flourished under his tutelage will slowly be reduced to paper towels. The ink will become wet black splotches suspended in liquid purple. A dendrochronology more than… [more]

In my novel Nira/Sussa, there’s a scene in a Midwestern Japanese restaurant with holes in the floor so patrons can sit in what they perceive to be Japanese style without, you know, actually having to do so.… [more]