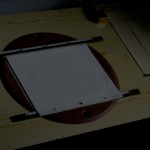 How I Killed My Father

One picture. This is all I have to prove my dad and I ever spent time together. He looked like a young Larry Hagman, and was wearing a fishing hat like Col. Blake. I’m about… [more]