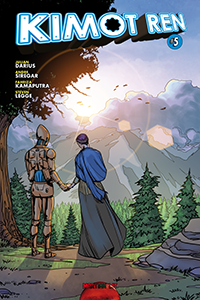 Our comics line began in 2014, almost six years ago. In that time we’ve published 30 standard issues:

In addition, we’ve published one collection: Martian Comics Vol. 1, which is available in an oversized print edition and on comiXology.

At present, we’re focused on a few specific goals. First, we’re trying to get out more collected editions. The Girl from Mars Vol. 1 should be next, but the revisions to the source material are taking longer than expected. From there, we’re going to try to complete the first collection of our four other titles.

In Martian Comics, we’re working on wrapping “The Tears of Khera,” an experimental six-issue epic. After that, the title will return to “The Girl from Mars” and cruise towards issue #25!

Meanwhile, we’re prepping two new series: The Horizons of Khera (the first installment of our new Cities of Khera graphic novel series) and The Tessellation #1 (a new sci-fi series set in its own multiverse).

Thank you for your support! Making comics is hard and costly. If you’d like to support our efforts, please share our products and consider pledging to our Patreon.