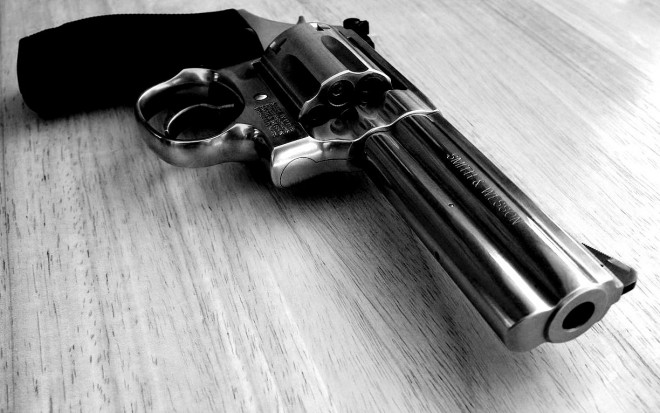 Suddenly it felt like I’d been kicked in the head by a mule. That’s all I could remember, that moment of impact. It was like I’d spaced out and just woken up when kicked. There was no mule, though. There was a gun in my hand.

I almost jumped to get away from whoever attacked me, but there wasn’t anybody there. Alone, I was kneeling on my living room floor in front of my TV. Piles of bones chips and goo were all around me on my tan shag-carpeted floor. The room was quiet, the TV being off, though there was a bit of a ringing echo fading from the air. I looked at the gun again.

Wait, I wasn’t completely alone. Lynette, an ex of mine, was asleep over on my blue corduroy couch across the room. She wasn’t stretched out, not like she’d intended to sleep there. She was more slumped over, sitting up, like she’d dozed off while watching TV.

Holding the gun, I tried to remember what had happened; what had I done?

There was a gun in my hand. My head felt like I’d been smacked by something big. There was gore all over the floor. Had I shot myself? Had I done it on purpose?

The living room was a mess. I could see crushed beer cans and paper plates of microwave mozzarella sticks and potato skins. I must have been having another late movie night or something.

I did that sometimes. I’d watch Killer Klowns from Outer Space, Troll 2, Chopping Mall, Deathstalker II, or something intentionally horrible like that. I’d have a feast of frozen snacks and some beer.

But… why would I have tried to kill myself? I didn’t even remember being particularly unhappy about anything. I checked, but there wasn’t a suicide note anywhere. Why had I done it? Why had I done it with someone in the room?

I reached and felt a big hole on the back of my head. I didn’t really feel any pain, but there was a hole. I wasn’t really bleeding, and I couldn’t feel anything in the front, but that hole in back felt huge. I was scared to touch it too much.

How bad was I messed up? Was I dying? Could I even be fixed?

I was blinking. I was breathing. My arms still worked. There wasn’t any part of me that appeared to not be working anymore. Despite the hole, I appeared to still be functioning in every way I could think of. Still, that big a hole had to have damaged something. Maybe I just couldn’t tell what was wrong.

Maybe my head was why I couldn’t remember anything. That part of my brain might have gotten blown out. It might have been in all that crap on the floor. Maybe I wasn’t thinking straight anymore. It seemed like my mind was working fine, but maybe I just couldn’t understand how messed up I really was.

Had it been about Lynette? I looked over at her, but it didn’t seem likely. I didn’t feel anything when I looked at her. There was no despondency, no crushing heartache.

What was going to happen to me? I didn’t want to check close, but this was bad. I couldn’t just forget it had happened; I had a hole in my head.

There was going to be hospitals and bills. People would scream at me–police and mental wards. Lockup. Was I maimed for life? Was I even going to live? I just couldn’t tell. Whatever was going to happen, I knew it wasn’t going to be good. It was going to be very, very bad.

Frankly, that’s really what I felt. I didn’t know why, but I wasn’t all that freaked out that I’d tried to kill myself. Dealing with the consequences, though…that scared the shit out of me. I just couldn’t handle that.

No, there was no way normal life was even going to be possible at that point. If I lived, I wouldn’t be able to take the shit I was going to have to go through. And, if I was going to die from it, why suffer through all the shit first? There just wasn’t any choice about it; for whatever reason I’d done it in the first place, I had to finish it.

I examined the gun, but it wasn’t going to be any help. The barrel had peeled back in four jagged pieces. It looked like some kind of horrible industrial flower. I touched one of the pieces and it was still hot. It must have misfired or something when I first shot. Regardless, I wasn’t going to be able to shoot myself with it again.

You know, I didn’t even recognize the gun. I didn’t remember owning one. There used to be a shotgun, but I’d sold that one time for beer money. Anyway, this was a revolver. It wasn’t black, but it wasn’t chrome…even before the misfire. It just looked gunmetal. It wasn’t really big, so I guessed it wasn’t a forty-five, but it wasn’t tiny either. Really, I didn’t know a whole lot about guns.

I needed time to think. Could I even think? I didn’t know; it felt like I could. There had to be something in the apartment I could kill myself with. I just didn’t want any pain. I had to find something.

Lynette moved. I froze, thinking she was waking up. She’d see all of it and would definitely call the cops. I’d lost my chance. However, she just mumbled something about ‘pancakes’ and shifted a bit before going to sleep a little deeper. I was safe, so to speak.

Still, I needed my apartment to be empty. I needed time to work, maybe get another gun. Running a car in a garage wasn’t an option, because I didn’t have a car. Or a garage. Slit my wrists in the bathtub? I thought that could work, but it’d take time. I needed time by myself for that, or anything else really.

But…how was I going to become alone? I was sure I could get her to go if I woke her up, say she was too tired for hanging out and needed to go home, but not if she saw the hole while I was talking. How could she not see that? How would she not see the mess on the floor? She’d be sleepy, but not that sleepy. She’d freak right out.

I had to clean up. I hid the gun behind the VCR; that was the easy part. The goo was harder; I scooped it into a pile with my hands. For the lack of anything better, I jammed it back into the hole in my head. What could it hurt at that point, right? Then I tried to hold it all in by forcing this light straw cowboy hat I found on the floor over it.

The cowboy hat puzzled me too. Was it mine? Where would I have gotten it? I would never have owned something hick like that. The straw wasn’t exactly beat-up or anything, but it was definitely well used. I couldn’t understand the hat, but there was nothing for it. I’d have to use it and hope for the best, use it to hold my head together for a couple minutes. I could try to figure out why I had it later, if I ever actually needed to.

Really, it didn’t look as bad as you might think. Like I said, there wasn’t a whole lot of blood. It seemed like I’d gotten up all the brains and bone and stuff. The hat hid the hole pretty well, too. It wouldn’t pass a close inspection, but maybe it wasn’t going to need to. All I needed was thirty seconds for a shove out the door.

I swallowed. I guess that still worked too. Then I walked over to where Lynette slept on the couch. All I could do was just wake her and give it a shot. I shook her shoulder lightly. “Lynn,” I said as she opened her eyes, “you fell asleep. We should probably call it a night and have you get on home. It’s pretty late.” I smiled. 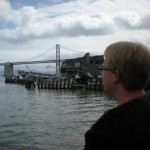 David S. Atkinson received his MFA from the University of Nebraska. His writing appears in Grey Sparrow Journal, Interrobang?! Magazine, Atticus Review, and others. His novel in short story form, Bones Buried in the Dirt, was published in January 2013 by River Otter Press. His writing website is davidsatkinsonwriting.com and he spends his non-literary time working as a patent attorney in Denver.