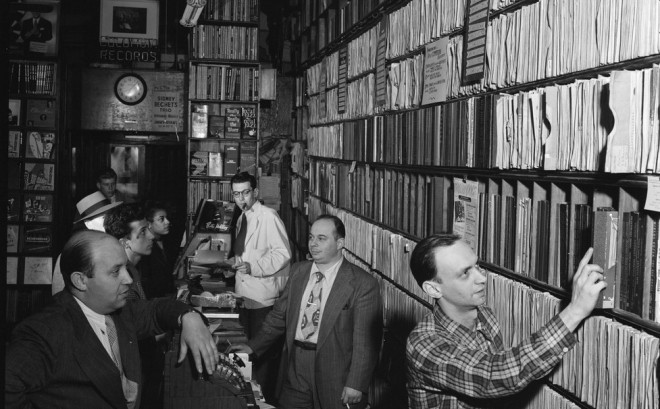 Chuck Disani approached her with loping strides that made a zipper sound as his legs  rubbed. His no-iron slacks were pleated. They would have looked better with a flat front.

The woman riffled through the D section and lifted a CD to her face. She could hear breathing over her shoulder.

“You call that music? More like soundscapes for zombies. Miss Celene ‘ima spear your ear drums with my Quebecois ice pick an’ drown you in summa my maple syrup violins.’”

With a slow eye roll, she stood back gazing, jaw drawn by gravity towards the floor. His face was stubbled, hair kinky, unkept.

“C’mon, go for something more throbilicious, kashunka voom deep, a beat you can bust to. Or hump with. ” His hips hoola-hooped with wobbly awkwardness, sending his shirt tail completely free.

“Oh, Pardon eh moi, mademoiselle. Je ma regrette. Just keeping it real. You from Quebec per se? Non? Ah, oui. Bon. Parlez-vous anglais? They don’t teach this kinda customer service in training class. You got to live the dream. Call it a knack for reading people. Not exactly mind reading, though it’s close. Amazing powers of insight. The shrinks don’t recognize it for what it is. They don’t have a label for it yet. I get into zones. That’s what I call it. Zones.”

She turned to face him. “Some would call it arrogance.”

“And they would be soooo wrong. Did you know that Celine defines what’s wrong with the world today?”

Chuck hiked up his elastic waistband. Save for the name badge, yellow and shiny and flat, his attire testified to a life without ironing.

“I do favors for my customers. Read their inner desires. I’m not that much older than you. But I have been around…”

“Ah, it appears I have offended you. I will leave you with this, mademoiselle. Put Celine back. This music your grandmother mother should listen to. It is not of our generation. A CD like that brands a person.”

She shook her head and stifled a laugh, not because she found him charming, but to disguise her embarrassment on his behalf. She crossed her arms, the Celine jewel case in her hand.

“I want to know, before I walk out of the store to buy this album from another establishment, and leave forever, never to return, just for my curiosity’s sake, to assist me when I call the BigDeal home office, what makes you think you can approach me like this? It will make the customer complaint so much more descriptive.”

Chuck patted his sweat stained button-down shirt. He paused and swallowed, as if wanting to form the words philosophically.

“A wise man by the name of Jim Morrison once quipped: people are strange. Why? People don’t connect anymore. Doctors/patients, husbands/wives, merchants/customers. We don’t cross boundaries anymore. We pen ourselves in. I’m saying this to you, strange lady, not as BigDeal store manager to “always right” customer. I speak as man to woman, the bald truth: you are too young to subscribe to this. Celine will kill your soul.”

“What business is it for you to comment on –”

“–Have you ever partaken of Fresca? This is the musical equivalent of the crystalline counterfeit that is Fresca. It will snow-blind you. At your age, you need something with more earthy, the dark stains of the pitted berry. Something hormonal credentials. Life juicey. Kapiche? Might I recommend — ”

She had already dropped the CD back into the stacks and was halfway to the exit.

He skipped ahead to close the gap. The subfloor vibrated. His name badge slapped against his man boobs.

The automatic door closed. She was now running to her car.

He pulled a moleskin notebook from his back pocket and a pen from behind the hedge of hair covering his ear. He wrote in tiny script: “Gravity sets us down. Seriousness seriously overrated. Who took the f out of fun?” He put the notebook back and hoisted his pants.

Now that she was gone, they could start in on taking inventory. It would be a late night. It was rumored that BigDeal was going bankrupt. If the company didn’t woo a prospective buyer, they might not last through next month. He wondered where he would be then. He wondered how long they’d still be selling CD’s. He felt hunger. It would have to wait. At midnight he  would forage on lomein from a white box and listen to Rush on shuffle play until the sun rose.

An Elton John tune was pumping at the back of the store. “Saturday night’s alright for fighting.”

He shouted across the emptiness: “Kill it, Deon!” Deon waved a thumbs up at him.

Chuck nodded, busted a smug dance move past the video games. An oversized display robot in carbonized battle armor faced him, a plasma rifle across its chest. It was taller than him. He gave it a nod. Fists of Fury VI was waiting for him back home as well, and though he never got anywhere in the game — he was trapped in the polar ice caves in Altamira quadrant — it was a cold comfort to know he could always pick up where he left it the night before. 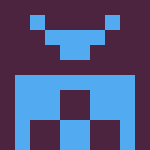