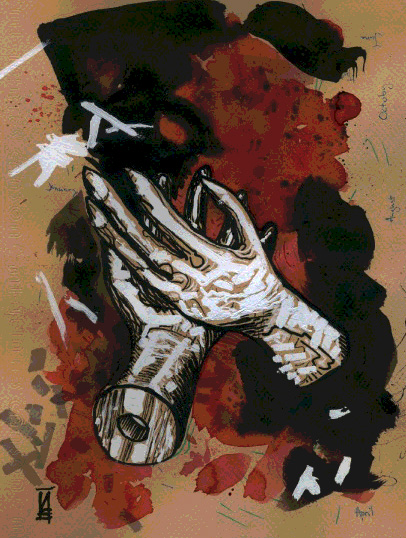 There’s really nothing wrong with the Valley. People accustomed to Sunset look down on it but paradise has its limits; thinking all of Los Angeles can be a palm-lined mirage of awesomeness is lunacy. The rich and famous have their haunts, as do their servants. People that cook and clean, teach and police, work in TV or on the fringe: they live and eat here. The Valley is only less by comparison, but compared to anywhere in Nebraska, it’s the best place on earth. Ken, sitting in his Fleetwood, smiles in this truth. He takes a slow breath and lies to himself as the scent of fresh air registers.

Summer rains in California are rare but so are nights like these. The shallow puddles around Chili’s reflect mutely as people wait outside for their remote buzzers to signal their turn at the trough. A blind date, 80’s music playing in the car, perfectly on time, Ken checks his Casio and smiles.

“Fifteen till eight, a date at eight, Ken won’t be late.”

He turns his key and gets out and shrugs as his comb-over dampens. Ken walks in past two hostesses in black with clipboards and insipid smiles. He nods as he files past toward a table for two in the open seating bar and takes the chair that affords him a good view of the front door. She should be here any minute. The phrasing in her last email made it sound as if she had a few reservations about a first date at Chili’s but that’s utter nonsense. The nice restaurants, like Outback, are only for birthdays or anniversaries.

Ken reads the menu looking for low calorie selections (his track suit was becoming a tad tight) but looks up when he hears a throat clear. Rochelle makes coy eye contact, wearing an orange tank top just as she said she would in her last email right before an “LOL.”

“That’s crazy. I have a great friend named Rochelle.”

She quickly sits as far away from Ken as the little round pub table will allow and offers a thin grin above the salt caddy. Never a good sign. It’s obvious that she’s out of his league but wits haven’t been factored in.

Rochelle is a top-heavy thirty-something with brown hair and a smug smirk that looks to have caused a few permanent wrinkles. A solid seven. She looks around slowly as if lost. Maybe she is. Maybe she’s just accustomed to better.

“Frugality is the new chivalry.” Ken does his best to sound profound.

“I still think black is the old black.”

Shit. She has ample wit to match her bra size. Whatever. Ken knows where this night is going even if his date doesn’t.

“So what do you do?” Rochelle never takes her eyes from the menu.

“I make replica foods, you know, like the synthetic models you see at buffets, and a few of the highly detailed dishes you see in commercials. The steam is fake. They use a small fog machine, but I don’t have anything to do with that.”

Rochelle slowly extends her right arm across the table as if she were royalty expecting a kiss upon her signet ring. “I’m a hand and forearm model. You probably felt as if you’d seen me before when I walked in. This arm has been in almost every jewelry commercial run during prime time for the past few years.”

“Wow. That’s, umm…incredible.” Ken quivers with excitement. Rochelle would do just fine. And the name. If anything was ever fated to be, it was this.

“Your profile said that you were in show business, Ken, and I guess you are, but when someone says that on a dating site, they usually mean something else.  So how exactly does one go about making plastic foods?”

“Hi. My name is Suzy, and I’ll be helping you guys out tonight. Oh em gee! This looks like a first date! How cute! You two lovebirds ready to order?”

Rochelle’s eyes widen at the implication and she orders something quickly; a salad of some sort. Ken mumbles that he’d take the same and hands his menu to Suzy with a nod of dismissal. She leaves with swaying hips and a blonde ponytail that follows suit.

“It’s quite fascinating, really. First I’ll start with the real thing. You know, like a whole fish or a plate of spaghetti. Then I’ll freeze it so it’s hard and then I’ll make a mold, or a template as we call it in the biz, so it can be used over and over. But that’s not the artistic part. My real work comes in later when I pull out the ol’ airbrush…” Rochelle’s eyes had drifted over to the bar and locked onto a bottle of vodka somewhere around “plate of spaghetti.” It’s an expensive brand judging by how high it is above the well varieties. But Ken doesn’t really give a shit. He’s going to get what he wants. Hell, maybe he’ll even be done tonight. He drones on and on, mentally willing the line chefs in the kitchen to hurry the fuck up. How long could two salads take, anyway?

“Hey y’all! Suuuuuzy’s baaaaack with two super yummy Cobb salads! You two cuties need anything else?” Both Ken and Rochelle wear pursed lips and give identical head shakes. “Alright! You two just holler if you need something!” Suzy wears vapidity like her bedazzled vest. She leaves once more with her ponytail tick-tocking like a pendulum.

“Look, this is going to sound a bit odd, but could you do me a favor and hold your salad out so I can take a picture of it?”

“Why?” is what Rochelle says, but her expression shouts, “You’re a waste of flesh.”

“As it turns out, I’m working on a project at home and I need a picture of a salad. Hell, I could even write this dinner off as an expense and say that it’s work related.”

Rochelle brings her chin down toward her chest and looks through her eyelashes at Ken. “Seriously?”

“Well… yes. Frankly, I need your hands in the picture for a size reference, and I’d be honored if you’d let me take a picture of your famous fingers.”

“Alright, I suppose this couldn’t get much worse.”

She takes her plate in both hands and shoves it out at Ken so quickly that a few bacon bits fall onto the table. He takes a camera out of his pocket and starts rabidly snapping pictures.

“You gonna have me hold this thing all night? I usually get paid for something like this.”

Ken digs in his pocket for two twenties and throws them on the table, not caring that the change will be well over fifteen percent. He’s out the door and halfway to his car before Rochelle digests the shock. Ken throws himself into his Fleetwood and smiles as all eight cylinders roar in response to his right foot.

The trip home is a blurred montage of streetlights and white noise from the radio. Ken wants a Porsche, a Ferrari, a goddamned rocket ship—anything to get him past the idiots and back home quicker. Twenty minutes later his key is sliding into the deadbolt as his excitement threatens to knock him on his ass. He swings the door open.

“Rochelle, my love, your Ken doll is home!”

Ken walks into the dining room and finds her sitting at the table surrounded by the night’s feast. There’s an entire turkey swimming in stuffing with raisins and almonds. There are mashed potatoes and boats of gravy and braided rye and a panoply of pies. The food is cold and Rochelle doesn’t say a word. She never does.

“Look, I know you’re probably a bit mad ‘cause I’m late, but the guys from work just wanted to have a quick drink and talk about the game. You know I’d love to stay here with you forever but the outside world beckons. Just let me take care of one quick thing and I’ll make it up to you.”

Ken runs into the study and plugs his camera into his laptop. His hands shake as he downloads the pictures from the restaurant. He crops out the salad and zooms in on the hands. The oh-so-perfect hands. His moan is orgasmic. “Rochelle, you’re going to absolutely love this!”

He prints out the clearest picture on a large glossy sheet of photo paper and runs back into the dining room to show his love.

“Aren’t these absolutely fucking perfect? Look at these knuckles! You’ll be famous when I’m done! Did you know your hands have been in almost every jewelry commercial run during prime time for a long fucking time?”

Rochelle keeps quiet, but it doesn’t matter. Ken knows he’ll be forgiven before the night is over. Rochelle is forgiving. She understands. She is loving and perfect.

Ken turns Rochelle’s chair so she’s facing him and sets the picture in her lap so he can see it. His brushes and paint are right under the table where he had left them. Rochelle hadn’t moved them although she abhors Ken’s untidiness. She’s considerate too.

Ken shakes a small bottle of light brown paint before uncorking it. He carefully dips a fine-tipped brush into the paint and smiles as the bristles break the meniscus on the paint’s surface. He starts working on Rochelle’s knuckles and the fine lines around her tendons. He gives her a small mole here and there. Ken’s eyes continuously dart back and forth between the picture in Rochelle’s lap and her hands. He finishes by glossing her perfectly manicured nails. Nothing too trashy; Rochelle is a lot of things but she isn’t a slut.

The brushes and paints go back under the table. Ken snatches the picture out of his love’s lap and crumples it before throwing it over his shoulder. Rochelle will pick it up later; she always does as she’s told. Rochelle is tractable.

Ken looks into Rochelle’s eyes and she looks back.

“You’re done, my love. You’re perfect. Look, I’m not hungry. I ate with the guys. But I made all of this food for you anyway. It’s all for you. It always has been.” 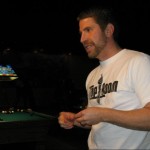 JJ Anderson is an Alaskan transplant currently living in the Southwest. His love for campy fiction and offbeat characters led to a bid to become an author in his own right. JJ’s publication credits include Tales of the Talisman. Trailer Park Juggernauts, a collection of short fiction about hillbillies with superpowers, is his first novel. You can find more at www.theantihero.com if you're interested.