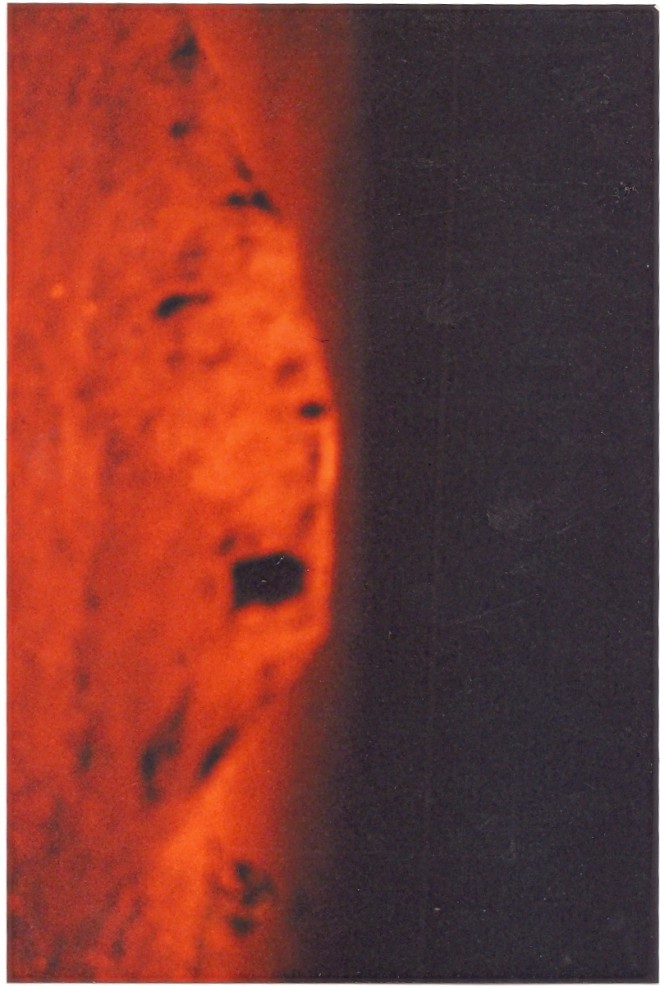 John M. Edwards, an alien spotter, drives out with some friends through the lonesome Texas tumbleweeds to party down with extraterrestrials.

Have you ever gotten an RSVP from Heaven?

So here I was smack effing dab in the middle of Texas, the Lone Star State, sitting among the blowing tumbleweeds swirling in a slow-motion blur across the prairie range, along with a collection of monster trucks and psychedelic trailers filled with seekers with Enlightenment eyes.

What were we all waiting for?

Or, I mean, a lack thereof.

Some of those planes must be, at least.

Marfa is worth writing home about, its citizens both capitalizing on and really believing in a peyote-inspired illusion, or cactus-juice overdose, that we are not quite alone in the universe.

The mise-en-scene was straight out of Steven Spielberg’s masterpiece “Close Encounters of the Third Kind”—the only flaws being Richard Dreyfuss occasionally overacting (as in “I don’t like the panties on the wash line” from “The Goodbye Girl”) and a depiction of space aliens not really looking very much like us.

As I sat enmired in the extreme adventure sport of “Alien Spotting,” I wondered not about daredevil “call puts” but whether my theory was a good one. Was humankind itself originated from another world, even one from a distant galaxy? If mankind were descended from the Apes, then why are the Apes still here?

I’m pretty sure that the Bible was written “elsewhere,” its diction demystified and reordered into the first usable space-age language–the “Futhorc”– in order to clue us in on how not to act: peace is preferable to war, progress triumphs over ignorance, words should never replace reality.

Ignorance is bliss only if you are an auto worker.

As a Texas-style “oil baron” (similar to a “robber baron,” which, of course, you know means industrial magnate not “bank robber”), every day I hear the hallelujahs of self-conscious cars crying, “Feed me, Daddy!”

(The only difference between Protestants and Catholics is in the wording of “The Lord’s Prayer.”)

If God did not exist, we would have invented him anyway.

As someone who is more sinned against than sinning, and only a little famous, I can promise you one thing: “If you mess with Tom James, Zagat Reviewer, you most certainly will arrive again in the post-apocalyptic world reincarnated as a stink bug.

In order for the “pagan gods” (not in the biblical sense of false idols but ancient belief systems) to return to our world all we have to do is really believe in them. Mere mortals might heckle and curse Apollo before lying facedown on their bellies, burdened with the memory of their own conceits. “Why have you forsaken me?”

Many astrophysicists are doing a good job of finding Him, when we wrap up our works every single day—yes, in the details. Brooklyn, once America’s fourth largest city with its own baseball team (The Dodgers), is now a borough of dumb guys.

Any serious thoughts about astrophysical oblivion and the insane vastness of space must eventually end the scientific conundrum of the “expanding universe” when the universe is already infinite.

I assume if God made us in His own image, he must be pretty good-looking indeed. Risking mild hubris, I might even jibe, “Lose the beard,” so that rather than admonish us as an elderly parent or fair-weather friend, He might instead convince us over a beer to maybe pursue a new avenue of opportunity: salvation in the nick of time.

I’m ready to make an investment with Richard Branson (whom I’ve already met: ask him) to travel on a Virgin craft out of our crippling mortifying atmosphere—just a dash more methane and we have a winner.

As a big fan of Global Warming, I can’t wait to see the lost cities hidden under pounds of ice in Antarctica.

I lick my finger and hold it aloft like a bellwether pepper, snoring away without a guilty conscience. We all say hiya in the mirror, except perhaps if we’re trying to hide a hairlip or downgrade a delusion.

Therefore naturally, advanced civilizations from Alpha Centauri and Ultima Thule, indeed anywhere in the known universe, would also look very much like us. Maybe we wouldn’t be even able to distinguish beings from Mercury, Venus, Jupiter, Mars, Uranus, Saturn, and Pluto from Earthlings, and one last planet whose name I (conveniently) forget, whose canals must all once have gushed with fresh water and contaminants—the Martian probes have already discovered ice crystals there. Hail Mary on that one.

Well, we have just discovered two new planets seeking names, and now the number is no longer nine but eleven. Or ten if you discount Pluto as a planet. Since I was born on 11/9, this seems an opportune sign to lose the emergency: there never is one.

Was 9/11 an attack on the earth by vengeful aliens against dangerous humans poising their fingers above the 911 buttons?

The results of the Viking Probe have not yet come back.

And maybe Martians insinuated themselves in Rome, disguised as Romulus and Remus. Venice sounds an awful lot like “Venus.” My guess, not a very good one, is that mankind must be from Saturn, or the previously unnamed extra planet–mad colonists who stubbornly insisted on having a ring (even one composed of swirling space junk), hellbent on destruction and revenge, demanding that everyone keep their mouths shut and other peoples secrets safe, while eagerly delivering their own.

Who knows, maybe our own sun is the secret location of Hades?

In fact, I’ll venture you this: Mankind is a nation of snitches.

Any plutocracy can tell you that.

Which of these two would you prefer to be your president: Tommy Lee Jones or Powers Booth?

Talk about a tough choice.

Come on, who but the adventurous astronaut William Shakespeare could have written all those plays. Ghost writers? Nah-ah.

After reading The Classics (and “The Chariots of the Gods”), many regard “demigods” (half human, half alien) with a small g as probably not ominiscent and succumbing to the profound vanities and careless flaws of mere mortal men: Alexander the Great, William the Conqueror, King Arthur, Charlemagne, Charles “The Hammer” Martel, Prince Vladimir, Prince Henry the Navigator, Magellan, Balboa, Cook, William Bradfield, Napoleon, Elvis, Jim Morrison, Kurt Kobain, Tom James… The list is endless.

I’m one of the lucky few that Mexico allowed to the see the molten “Little Astronaut” hidden inside a Mayan ziggurat, coiled in feotal position as if he were preparing for a crash landing. In addition, pre-Columbian gold looks a little too sophisticated for it to be of local manufacture.

Exnay on Italian explorer Columbus who finked on his own discoveries, cleverly covering it up by saying he had found with fabulous happenstance the other side of the “Indies.”

Jesus Christ, the statues are real.

Used to a night sky relatively starless, burning with aerosol buzzes, lightning-bug fluorocarbons, and ethereal kilowatt hours, when we look down from an aeroplane or army helicopter at what appears to be advanced circuitry or floss-filament microchips, we wonder how in the hay did we build all this stuff? We didn’t. They did.

With an alien spaceman warcry, “This Bud is for You!”

The ID is a very dangerous weapon of advanced warfare and psychic terrorism (shades of “Forbidden Planet”). We flap down a card made in our own image (adjusted by photographers to make us look mad, lonely, and estranged), almost everyday to buy beer, smokes, Penthouses, Prozac, and pretzels. The new skyscrapers that just went up seemingly overnight without us knowing it might have not have actually been built—but landed.

Who is better-looking, Angela Jolie or Jennifer Aniston?

Similarly, a long time ago I met both of them (before they were big) without knowing who they were. And like my patented quote about the apocalypse: “The final battle between good and evil ended up a tie.”

Now sitting in the middle of the oatmeal-colored prairie, I noticed, as did Alexander Pope, “The stars shine still.” Every now and then, many of them even fall?

What do you think?

After waiting several hours and without seeing any strange lights on the horizon, I at last reluctantly left this charmed landing site, with my ultimate belief in space aliens far more advanced than we strictly intact. (I wasn’t going to fall for Roswell’s “The Alien Autopsy,” though, far less convincing than a mock-up by Hollywood makeup artist Rick Baker). “My poor fool is hanged” (King Lear, William Shakespeare).

However, a man named Edwards wrote a pretty good book in the 1950s about our friends from abroad and the vagaries of time travel in space, more convincing even than “A Brief History of Time.” But not as convincing as “Space 1999,” starring Martin Landau and Barbara Bain. Or, “The Thunderbirds” and “Captain Scarlett.”

Well yeah, it was only after I left the impromptu visitation sight for a midnight breakfast party at the nearest “Keukendutch” (eggs, bacon, browns, toast, pancakes—all drowned in maple syrup and served on a wooden plate by waitresses in period folk costume)—that I finally marveled over the artistic Marfa Family.

Where did all these shining happy faces come from?

Who were these blond-haired hipcats straight our of John Wyndam’s “The Midwich Cuckoos.”

I said, where did they come from?

I SAID, where did they all come from?

Even the burly rednecks crowing “—at was good!” “goyodamn!”—guzzling and crushing Amheiser-Bush cans helped get me back to my senses. Why the extraterrestrials had been sitting beside us the entire time, and maybe, just maybe, I might be one of them…

As a character whose body I partially inhabit blurts out in my future bestseller, “Gorgeous Dream of Flight,” “WHY WAS I BORN IN THE FIRST PLACE?”™

Stealing someone else’s intellectual property is as bad as poetry readings. 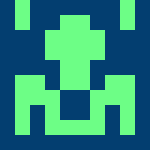 John M. Edwards is an award-winning photojournalist, writer, editor, and poet. He is also the editor-in-chief of the upcoming annual Rotten Vacations. He turned down a job as lead bassist for STP (The Stone Temple Pilots) way back when before they were big. Plus, he helped write “PLUSH” (the opening chords), voted Best Song of the 205h Century by Rolling Stone Magazine.