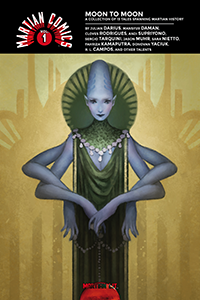 Our first collected edition, Martian Comics Vol. 1: Moon to Moon, is a beautiful 240-page book collecting 13 stories, written by Julian Darius with work by 15 different artists and colorists. The stories span 18,000 years (about 10,000 Martian years) of Martian civilization, from their moon landing to our own.

And it’s on Kickstarter now, both in digital and as an oversized paperback!

Here’s what some reviewers are saying about Martian Comics:

This book has been seven years in the making! And if you act in the next few days, you can reserve either the digital or the oversized print edition at a much lower early-bird price! (Your credit card won’t be charged until the campaign ends on 5 June.)

Check it out on Kickstarter here.

Also, thank you for spreading the word about this Kickstarter and our comics! Projects like this live or die by word of mouth, whether it’s in person or on social media. Getting eyes on our comics is a huge challenge (and a different skillset than making comics). Anything you can do to spread the word means we can focus more on making the best comics we can! Thank you!