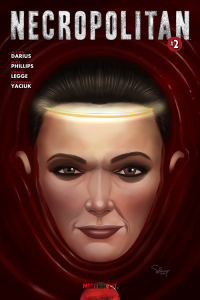 On Mark’s second day in Hell, he makes the rounds with Jack the Ripper and John Dillinger… but everything goes sideways!

The 32-page issue is written by Julian Darius and Mike Phillips, with art and cover by Steven Legge, colors by Donovan Yaciuk, and letters by Darius and Legge. The $3.99 issue is available on ComiXology now! If you prefer a DRM-free PDF of the comic, it’s available here.

Martian Lit’s comic line began in 2014, and this is our 19th comic overall. We’re building an elaborate mythos, with four series sharing a single sci-fi universe, along with a separate series set in Hell. You can see all of our comics on ComiXology here.