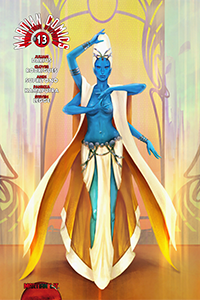 In the first story, illustrated by Andi Supriyono and Fahriza Kamaputra, set during World War II, an allied aircraft encounters a Martian U.F.O. over Europe!

Second, we begin a longer story exploring Martian mythology’s version of an underworld! Illustrated by Cloves Rodrigues and Fahriza Kamaputra, the story embraces and expands Martian religious history like never before!

The 22-page issue is written by Julian Darius, lettered by Darius and Steven Legge, with a cover by Marlena Mozgawa Lenamo. The $2.99 issue is available on ComiXology now! If you prefer a DRM-free PDF of the comic, it’s available here.

Martian Lit’s comic line began in 2014, and this is our 19th comic overall. We’re building an elaborate mythos, with four series sharing a single sci-fi universe, along with a separate series set in Hell. You can see all of our comics on ComiXology here.