We’re working hard to get more comics out, and we have a ton in various stages of completion. We thought now would be a good time to update you on where we’re at and where we’re going. 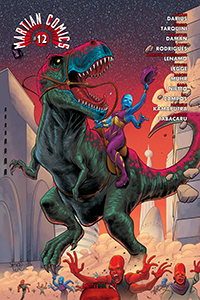 We should get Martian Comics #12 out in September. This is a big issue, with three stories, pin-ups, and extras. There’s just one story waiting for coloring and lettering to be completed, and then it’ll be done.

Martian Comics #13 should follow in October. It features two stories, one set during World War II and the first part of another story featuring the Martian underworld. The issue is done except for lettering.

Martian Comics #14 and #15 continue and conclude the Martian underworld story. Coloring and lettering is still outstanding on these issues, but we hope they’ll be out in November and December, respectively.

Meanwhile, Necropolitan #2 is nearing completion. We’ll be running a Kickstarter for it soon, and it’ll be out in 2018.

The Synthetics #0, featuring a prequel to the Robot Revolution seen in The Synthetics #1, is about halfway colored and still needs lettering. It should also be completed in 2018, and we’ll hoping it’ll follow quickly after Martian Comics #15, perhaps in December.

Once Martian Comics #12 is done, we’ll begin putting together The Girl from Mars Vol. 1, our first collected edition. It’ll collect all the “Girl from Mars” material from the first 12 issues, a total of 197 pages of story, not counting extras. It should also be completed in 2018. 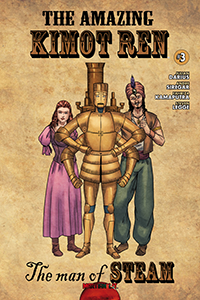 Art for Kimot Ren #3 is complete, but its colorist is working on other things first, so it’ll likely be delayed until early 2019. It’s a big 37-page issue with four different stories that advance the plot of a Martian android stranded in the Wild West with a traveling show.

Martian Comics #16 continues “The Girl from Mars.” As our villain narrates the secret history of the 20th century, this issue will cover all of 1969. Art is mostly complete, and coloring will begin once Martian Comics #12 is complete.

In Martian Comics, we’ll be running a six-issue storyline set pretty early in Martian history. It’s a beautiful and strange story about the politics of a Martian city, miracles, social classes, and uniting Mars as a single planet. But most of all, it’s about a Martian girl who wasn’t loved. Art for these six issues is almost complete; coloring and lettering has begun.

Also in Martian Comics, we’ll have a couple other issues, featuring more “The Girl from Mars,” a story about New Zealand, a story about depression and cosmetic neurological modification, and a short sequel to the six-issue storyline mentioned above. Martian Comics Vol. 2 will collect that six-part story and these other short stories, leaving only a couple issues with “The Girl from Mars” material uncollected. Then it’s on to our big anniversary issue, Martian Comics #25, which we might get done around the very end of 2019 or early 2020.

Obviously, schedules are subject to change. In the process of writing, drawing, coloring, and lettering, not to mention editing everything at every stage, delays can occur at any of these steps. But we have a ton of material coming, much of it already illustrated, and we think you’ll love it! We’re aiming to have seven collected editions out by the end of 2019, with only a few issues uncollected, clearing the slate for a whole new phase of comics production!

Thank you so much for your support! It means the world to us, and anything you can do to spread the word is appreciated!