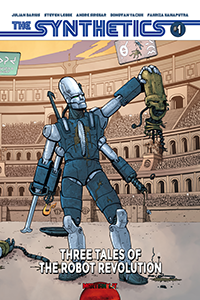 The first issue of The Synthetics, featuring three exciting stories of the Robot Revolution on Mars, is now on ComiXology! The 46-page issue, also featuring a bunch of extras, is priced at $3.99.

The comic is written by Julian Darius, with art by Steven Legge and Andre Siregar, with colors by Donovan Yaciuk, Fahriza Kamaputra, and Legge. It’s lettered by Darius and Steven Legge.

You can learn more about the series on its webpage and on Facebook. You can see the full series on ComiXology here.

This is Martian Lit’s 17th comic, overall. You can see all of our comics on ComiXology here.