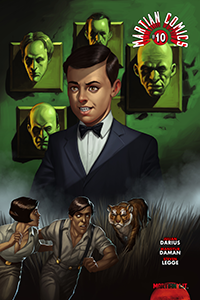 The 21-page issue concludes “The Second Most Dangerous Game,” written by Julian Darius, with art by Mansyur Daman. The sci-fi riff on the classic story by Richard Connell (who is himself a character in our story) began as a back-up in Martian Comics #8, before taking over issue #9. The story now concludes in issue #10, which features a cover by Mansyur Daman and Roni Setiawan that’s an homage to the movie poster for the 1932 movie adaptation of the classic story.

The issue also includes a preview of Lazarus, the Forever Man #1, a 70-page first issue coming later this year from Martian Lit.

Martian Comics #10 is priced at $2.99 and is available now on comiXology, as a DRM-free PDF, and on Kindle.