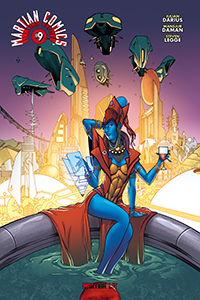 The ninth issue of our ambitious indy sci-fi comic Martian Comics is now on ComiXology! The 24-page issue is priced at $2.99.

The comic is written by Julian Darius, with art by Mansyur Daman. It continues “The Second Most Dangerous Game,” which began in issue #8.