“The Canals of Earth” is on Kickstarter Now! 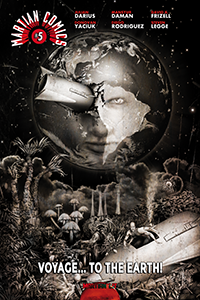 Martian Lit is proud to launch the Kickstarter for our newest sci-fi comic book, “The Canals of Earth!”

Watch as Mars looks to the sky and sees Earth, imagining her as a four-armed goddess with her own mythology!

Watch as Mars spies Earth through a telescope and lands probes here… before human history even began!

The 23-page color story appears in Martian Comics #5, but it’s totally self-contained and requires no knowledge of the overall series.

As part of the campaign, we’re offering the issue in print in a limited, signed-and-numbered edition. We’re also offering limited postcard prints and other goodies! Get ‘em while you can!