Did you know that the beloved leader of the Autobots had a fetish for underage girls?

Or that a Megatron look-alike not only shared the same fetish, but repeatedly tried to rape those girls?

All of this occurred in official Transformers products — a line that starred the original, Generation One versions of these characters.

In 2006, the Transformers toy line was in a transitional phase. The line known as Cybertron had wrapped up, along with the animated series that went along with it. The 2007 live-action movie was on the horizon, and the Transformers franchise was mostly concerned with keeping something in the stores until the movie, and its corresponding toys, could be released. In the U.S., Hasbro launched its “Classics” line, featuring redesigned versions of beloved original characters.

Parallel to the Cybertron line, Takara was also offering another line called “Binaltech.” Binaltech toys all transformed into cars — and only cars. Rather than being made-up cars, the car forms in the Binaltech line would be real-world models, lisenced from real car manufacturers. (Volkswagon prevented a version of the character Bumblebee from transforming into a Beetle, not wanting – perhaps due to the company’s World War II history – to be associated with “war toys.”) Even cooler, the Binaltech cars would be reproduced to scale, in metal, and in exacting detail — so much that Binaltech toys look like model cars, yet still transform into robots. To get this to work, the transformations into robot form were notoriously difficult.

The line was conceived as consisting only of the good Transformers faction, logically known as the Autobots. But after the line proved successful, it was expanded to include a few evil Decepticons — who now also transformed, unlike most past incarnations, into real-life cars.

In the U.S., Hasbro released Binaltech toy molds under the “Alternators” label. To keep the price down, the metal used in Japan was swapped for cheap-looking plastic, which kind of defeated the line’s whole point. Understandably, Alternators didn’t sell well in the U.S., and many of the Japanese models were never released stateside.

The Japanese Binaltech stories were supposed to be set between 1986 and 2005 in this original continuity. A robot plague of sorts forced the Autobots to find new bodies, and the real-world car companies were eager to do their part for the cause of good. This explained the new figures, all of which had Generation 1 names. When a few Decepticons were added, the story explained that they had hijacked the Binaltech process. How they were going to get their old bodies back in time for the events of the animated movie, set in 2005, was never explained.

It was in this context that Takara came up with the idea of “Kiss Players,” the line set to succeed Binaltech. The original idea seems to have been to pair Transformers toys with figurines of girls.  Reportedly, the line was supposedly even created in order to appeal to girls.

The early Kiss Players releases were simply old Binaltech figures, recast in plastic instead of metal, with silly little plastic figurines of Japanese girls. Some kind of accessory, which also transformed, was also added — such as a surf board that turned into a sword.

But the Kiss Players girls looked like sexualized pre-teenagers, stylized in what many Americans (wrongly) consider “the manga look.” Although officially of age, and said to be old enough to drive by the accompanying literature, the artistic style deliberately exaggerated proportions to make the girls appear not only younger but actually underage.

Well, you might say, that’s common to a lot of anime and manga. You can object to it, if you want, but it’s nothing new.

But the artistic style was far from the only problem. A more serious one stemmed from the fact that the toy line needed a narrative justification. Even the most ridiculous Transformers toys have little blurbs explaining their existence. If the toy in question is simply a repainting of Optimus Prime, something on the box will explain why Optimus Prime chose that color scheme. Moreover, the Binaltech manga series would be succeeded by a Kiss Players manga, which would have to explain the concept.

So why would the Transformers hanging out with underage girls? Because, like the earlier Motormasters line, they got their power from these girls. Yet these girls didn’t transform into engine blocks. No, they powered the Transformers through kisses — hence the name “Kiss Players.”

That’s right: the power of an underage girl’s kiss just seemed to charge Optimus Prime’s engines, readying him to go into battle against the Decepticons.

Because there’s just nothing like suggestive sexual contact with underage girls to make the body of an extraterrestrial war machine flood with energy.

I’m sure someone thought this was a cute idea: combine Transformers with the fad for big-eyed manga girls, then make the girls give those Transformers cute and innocent little kisses.

But then you see the figures. And how they’re posed in promotional photographs. And the art on the box.

Consider the Optimus Prime toy, packaged with a girl named Melissa. In Japan, Optimus Prime is known as Convoy. Melissa was supposedly the character Marissa Faireborn (who appeared infrequently in the cartoon show after the movie), though she had never been seen this young. 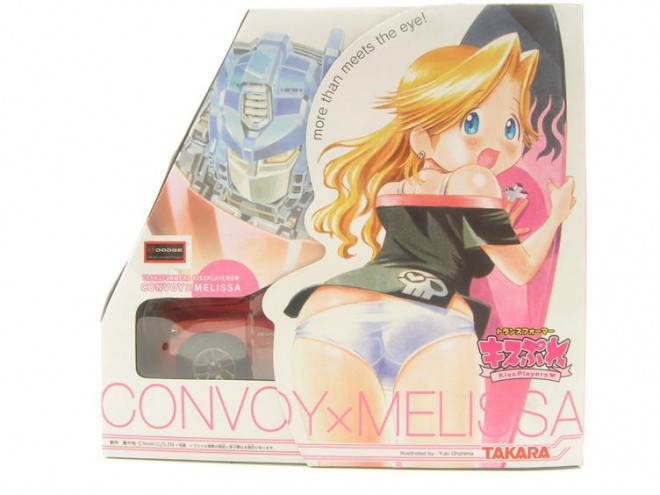 Optimus Prime is marginalized on his own box, in favor of a blonde girl in her panties and sticking her ass out towards the viewer.

Here’s the box for Autorooper, known as Jazz in the U.S. His girl, dressed in a fetishistic sailor outfit, seems particularly in distress. Due, of course, to an electrical gremlin of sorts that is emerging from her crotch. (Because girls’ crotches are filled with dangerous energy.) 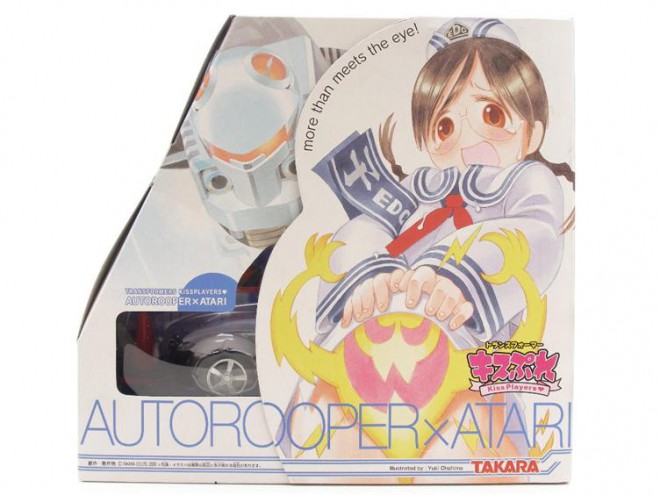 These boxes are glorious in their design. Besides focusing on the girls, the part of the front of the box that features the girl opens to give a better view of the toys. This lets you see another image of the girl on the inside of this flap. Like this one, from the Convoy x Melissa box: 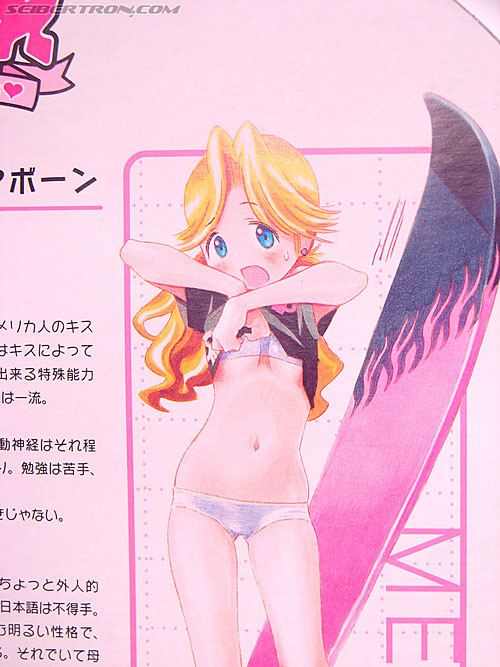 There’s Optimus Prime’s girl companion, in some… very tight panties, taking off her shirt. She’s blushing and sweating, like she’s shy or alarmed for some unknown reason. Is some off-panel Decepticon forcing her to do this? Or is Optimus Prime?

It’s worth noting the transformation of the Transformers motto, “More than Meets the Eye!” Originally, that signified how these were “Robots in Disguise” (robots who could masquerade as human vehicles). Now, “More than Meets the Eye!” takes on an entirely new meaning. It appears in a soft, feminine arc along the edge of the flap that opens on the front of the box, as if suggesting that, when you open the flap, you’re getting at what lay beneath. The phrase is deliberately played with here, suggesting the pedophilic content barely masked behind the veil of innocent kissing.

The boxes also featured a see-through window on the side, as well as an image of the girl kissing the robot in the box. Here’s Optimus himself, getting his charge of power from his here particularly empassioned girl: 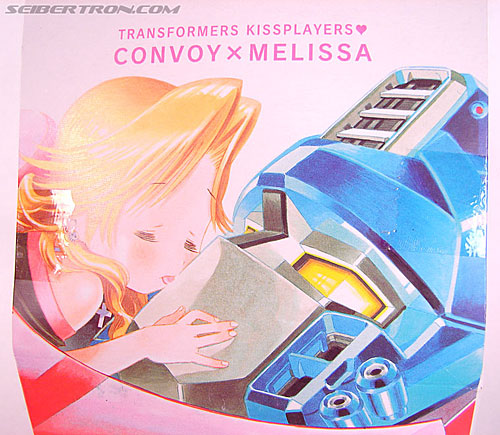 Takara’s publicity images also hightened the sexuality. Here’s how the company positioned Melissa in one advertisement: 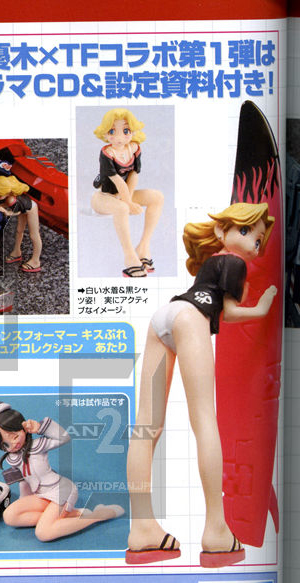 Here, Melissa again bends over to show her panty-clad ass to the camera. She’s leaning into the surf board that transforms into Optimus Prime’s phallic sword — which is decorated with flames, suggesting it’s hot with passion.

If you look around the internet, you can find plenty of fan-made images of Optimus Prime posed with his female figurine. Her sitting on his face, for example.

Takara ended up only producing a few of these toys. What was far more controversial were the stories spun out of the toys.

One of the real strengths of the Transformers has always been the fact that the toys were part of stories, wherein characters had real personalities and the Transformers grew into a real mythology.

Any Kiss Players story was going to be problematic. The toys themselves featured CDs, which contained radio plays featuring the Kiss Players. But it was the manga that seemed to take real joy in deliberately pushing the pedophilic edge.

The manga wasn’t allowed to feature explicit nudity or depiction of sex – Takara would not have allowed it. But the manga certainly contained a large amount of sexually evocative imagery.

Almost any excuse was used to splatter the scantily-clad girls with something resembling white fluid. The girls frequently were shown cowering in fear, blushing and teary-eyed, backed against walls in suggestive postures, asses raised in the air.

For example, here’s Atari, clad in her sailor uniform, in distress and showing off her ass: 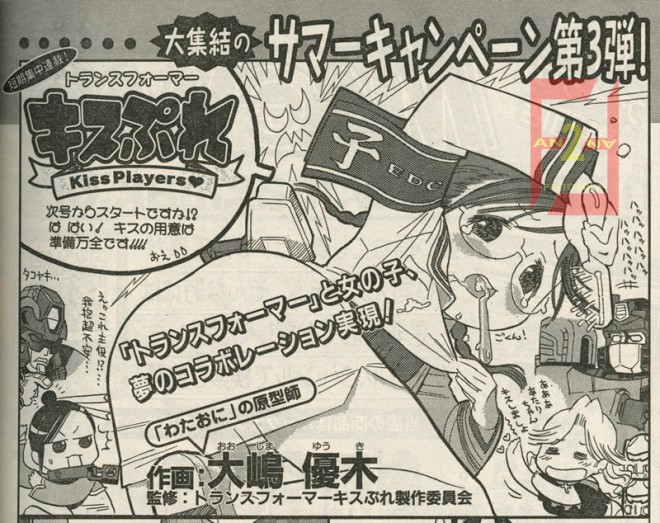 Here’s the same character, all but nude, shocked in her panties, her sailor costume ripped, her arms fearfully covering her breasts, and her back arched to shove her ass out towards the approaching Transformer — which, in this case, is none other than Optimus Prime in his Binaltech body. The apparently nude girl who appears as a ghost inside him is a visual shorthand that occurs commonly in the Kiss Players manga, seemingly meant to indicate the power he has achieved through the girl’s kiss. 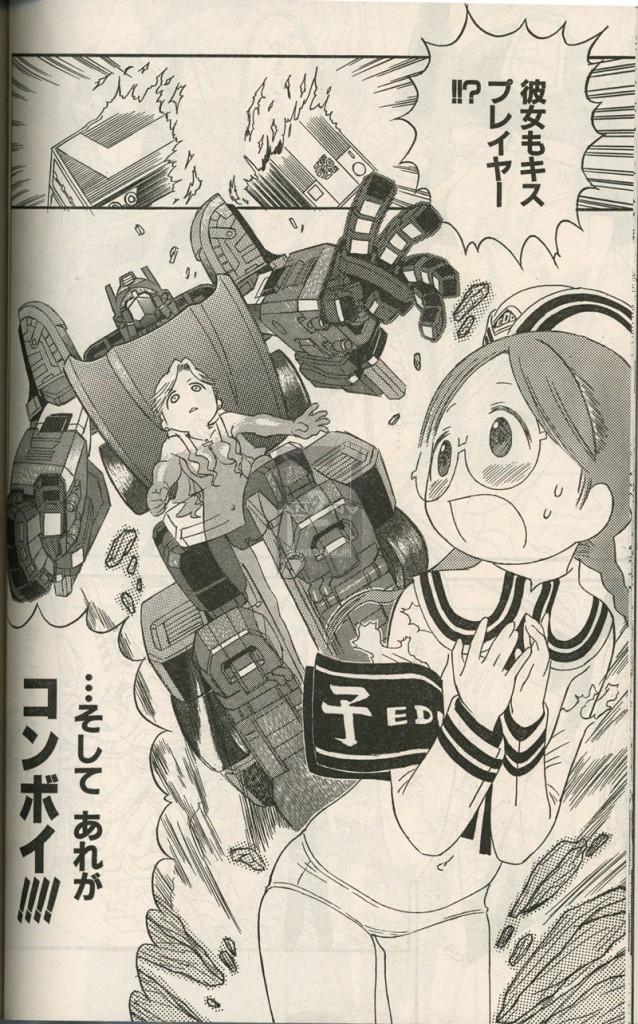 Most famously, however, the story involved a villain named Legion, a Megatron-look-alike who bound and ate girls, allowing further titilation. 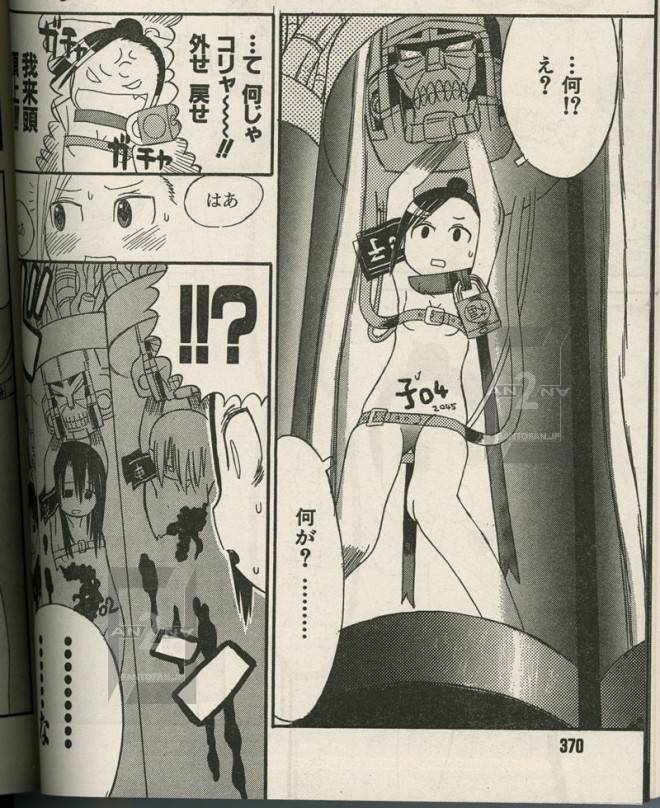 Note the fluid splashed around on the page below. It apparently drips from the body Legion is eating, flowing down over the helpless girl, which is horrific enough. But the ambiguous art also suggests that the girl in bondage is pissing her panties. Of course, the art evokes pornographic images of semen splattered on women, particularly on their faces. 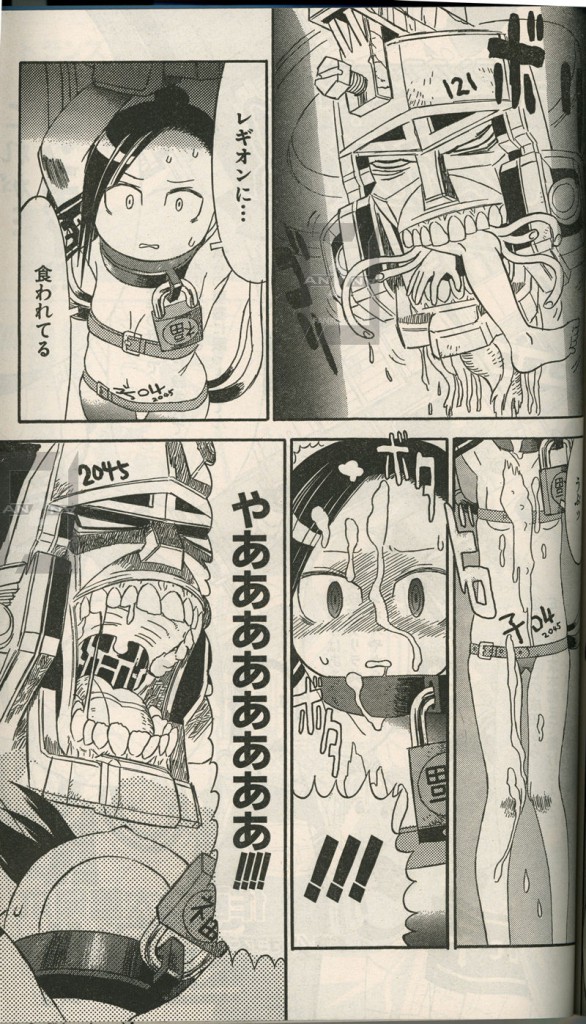 Legion is most known for his very peculiar tongue — which acts like a long, veiny, obviously phallic tentacle. This plays on the long-standing motif of tentacle rape, although that motif is typically associated with pornography rather than ostensibly kid-friendly toy lines. In Legion’s case, his tentacle / tongue — suspiciously organic for a robot — even had a urethra and seemed wet, splattering some kind of ambiguous fluid all about. It often thrust out towards the girls, implying a threat of rape. 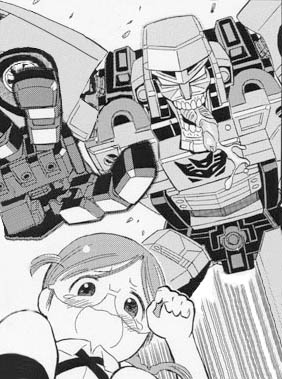 On the page below, Legion thrusts out his tongue at the girl in the middle of the page, weilding it as a prehensile weapon: 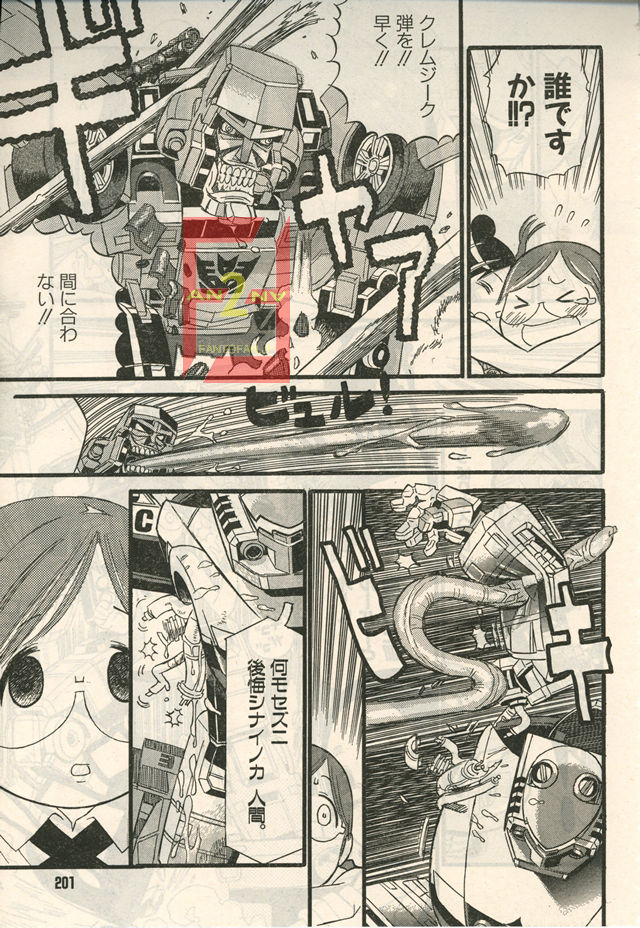 The character of Legion isn’t actually Megatron; he just has Megatron’s distinctive original head. The Kiss Players Optimus Prime, despite having a new body, was explicitly intended to be the original version of the character.

It’s all very easy to blame the entire Kiss Players line on the same Japanese strain for pedophilic titilation that has put panties in vending machines. It’s worth pointing out, however, that there was a Japanese backlash against including such content in a Transformers comic. Some even complained the series was ruining their childhood memories of the Transformers characters.

In the U.S., coverage of the Kiss Players was limited mostly to the internet. Surprisingly, cable news never got hold of the story, even after the live-action movie became a huge success, just a single year later. Online, some have been offended by the Kiss Players, while others have justified it as a product of a specific Japanese cultural context.

Kiss Players didn’t last long, and few toys were released. But it remains a fact that, just one year prior to the live-action movie, the original Optimus Prime was still around and cavorting with girls in their underwear, getting power from their kisses. Just a year before the movie scored at the box office, the Autobots were busy defending screaming girls in their underwear, splattered with unknown fluids, from implied tentacle rape.