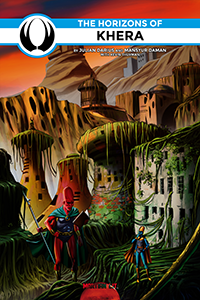 
On his journey to visit each Martian city, Kyshi Miro arrives in the city of Khera to find it in chaos. A mysterious vegetative network has grown within the city, and Portaan Dar, the city's chief biologist, has been unable to control it. As it continues to grow, it slowly but inexorably touches all aspects of life within the city, deforming the city's entire culture in unexpected ways.

Cities of Mars is an ongoing series of 12 graphic novels, each focused on one of the 12 ancient Martian cities. Written by Julian Darius, each graphic novel will be illustrated by a different artist whose work reflects the city, giving each city its own style and personality.

The series stars Kyshi Miro, the first Martian to visit every city on the planet, a journey that would later form the basis of the Martian calendar. As such, this series is technically a prequel to Martian Comics, although it can be enjoyed on its own.