We hear “God Bless America,” beginning with the line “my home sweet home.” Fade in. Brian, David, and Charlene Watkins stand around the table in their modest kitchen. To the side is the house’s front door. On the kitchen table is a birthday cake with twenty-one candles. The song finishes.

CHARLENE: You’re so much like your father. He went to war and now you.

CHARLENE: It’s just a few years, and we’ll see you again, and we’ll all be a family.

BRIAN: I know, Mom, I know. This has been great… really wonderful.

CHARLENE: We love you so much. Your father and I both.

David produces a couple of cigars from his pocket. Charlene seems surprised, but Brian is silent. David hands Brian a cigar.

DAVID: It’s your twenty-first. When you got your orders… it made me proud, son. You’re a man now. Have a cigar with your old man.

BRIAN: It’ll be an honor.

Brian takes the cigar and puts it in his mouth. David lights Brian’s cigar. Brian coughs.

DAVID (laughing a bit): You’ll smoke worse than that in Vietnam, if I know you.

David places the other cigar in his mouth and lights it. He puffs a bit.

DAVID: When you get back, we’ll smoke another… and you can tell me all about Vietnam. (pause) We can do this all again. Your birthday, just three years from now. Just the same.

CHARLENE: Oh, I’m so proud of you.

Brian puts the cigar into the ashtray, without extinguishing it, and rushes to the door. Charlene looks apprehensively at David. Answering the door, Brian finds Jane and John.

BRIAN: Hi, guys. My, um, my parents were just celebrating my birthday.

JOHN: How you doin’, buddy?

BRIAN: Fine ’till you showed up. (to both of them) Come on in.

The two step inside and the three move into the kitchen area.

DAVID: John Burrow… (shakes John’s hand) we haven’t seen you for a while. How you been keepin’ up?

DAVID: This is my wife, Charlene.

CHARLENE: John. I know your mother from church.

CHARLENE: We don’t see you there often, do we, David?

Charlene seems mildly annoyed at this.

JANE: I’m sorry… we haven’t much time… I promised my parents I’d bring the car back by, well…

DAVID (taking the cue): Well, son, happy birthday. We’ll go to a movie tomorrow… spend some time before we take you to the base. Come on, Charlene.

CHARLENE (looking at Jane and John): David, are you…

BRIAN (picking up the still-smoking cigar): Oh, thanks, I won’t.

David leads Charlene off. There is silence until the three are sure the adults have left.

JOHN: It’s been so long since I saw them, I forgot what pricks they can be.

She embraces Brian and they kiss.

BRIAN (holding out the cigar to John): You want this cigar?

BRIAN: Smoke it outside, huh? (pause) It makes you stink.

JOHN (walking to the door): You gonna fuck on the kitchen table?

John exits through the front door.

There is a pause.

BRIAN: I’ll miss you too…

JANE: (looking down) Come home, okay? Remember me… remember me and come home.

BRIAN: I will. (seeing she’s emotional, embracing her) I’ll miss home… I’ll miss you. Every day I’m there.

BRIAN (looking at her pointedly, the two making eye contact): As soon as I get back, you’ll be Mrs. Jane Marie Higgins Watkins.

In the silence between them, Jane begins to slowly reach down towards his crotch as they embrace. Then she pulls back, suddenly happy — to distract him.

JANE: I have a present for you.

JANE: Of course. But you can’t get it now.

BRIAN: Okay… when am I going to get it?

JANE: Tomorrow night. (acting seductively as only an inexperienced twenty-year-old can) You’ll come over… after the movie, won’t you?

BRIAN: It can be arranged.

JANE: I have a… special… surprise for you.

BRIAN: I love you.

JANE: I love you too.

They kiss and Brian begins to fondle her. John opens the door and enters.

JOHN: Sorry, man. It’s just… I got finished the cigar and, um…

Jane moves to the door.

BRIAN (to John): Can I talk to you for a minute?

JANE: I love you.

BRIAN: Don’t. Look, don’t worry about it. But I want you to promise me something.

BRIAN: I want you to look after Jane for me.

BRIAN: No, listen… I’m going to Vietnam. I’m not being pessimistic. But anything could happen over there. You understand?

BRIAN: Look after her. Take care of her. Be there for her. This is going to be hard on her.

BRIAN: Do you promise?

Brian leads John to the door. They open it.

BRIAN: She means the world to me.

John exits. Brian stands at the door for a few seconds. Then he starts to wave, which he continues for a while. He then closes the door, seeming a little depressed. Fade out.

We hear loud machine gun fire. Fade in. Brian and Nate, wearing army fatigues, crouch beside some trees behind a machine gun emplacement. Both are firing mounted weapons. They face away from the audience, positioned so that they can’t see each other.

BRIAN (shouting): NATE? WHERE THE FUCK ARE THEY?

BRIAN (shouting): WHERE THE FUCK ARE THEY?

BRIAN (shouting): YOU GOT A GIRL, NATE?

BRIAN (shouting): YOU LOVE HER?

NATE (shouting): I GOT HER PICTURE, DON’T I? HELL, WE ALL GOT PICTURES. IF WE DIDN’T, WE’D HAVE TO STEAL ‘EM FROM PICTURE FRAMES AND PRETEND.

BRIAN (shouting): YOU LOVE HER?

NATE (shouting): I MARRIED HER BEFORE I LEFT. THAT’S CLOSE TO LOVE, RIGHT?

NATE (shouting): HANG ON TO YOUR GIRL, MAN. SHE’LL GET YOU THROUGH.

NATE (shouting): YOU BEEN HERE THREE MONTHS. JUST LONG ENOUGH THAT YOU’RE SAFE TO START TO GET TO KNOW.

BRIAN (shouting, frustrated): WHAT THE FUCK ARE WE DOING?

NATE (shouting, with very separate deliberate words): I’M SEEING HOW LONG IT TAKES TO CHOP DOWN A TREE.

NATE (shouting): I’M CHOPPING DOWN A TREE WITH MY BULLETS.

BRIAN (shouting): SO WHERE THE FUCK ARE THE GOOKS?

NATE (shouting): I SAID NO ONE KNOWS.

BRIAN (shouting): SO WHAT ARE WE DOING?

BRIAN (shouting): I SAID WHAT THE FUCK ARE WE DOING.

NATE (shouting): FIGHTING A WAR. THEY SHOOT, WE SHOOT.

BRIAN (shouting): WHAT THE FUCK ARE WE FUCKING DOING?

NATE (shouting): WHAT WE’RE SUPPOSED TO.

BRIAN (shouting): SOMEONE HEARS A SHOT AND WE ALL START FIRING. THAT’S WHAT WE’RE DOING.

BRIAN (shouting): WHAT WE’RE SUPPOSED TO?

NATE (shouting): IT’S A FORMULA, KANSAS. IT’S ALL BULLSHIT. WE’RE FIRING IN THE RIGHT DIRECTION. THAT’S ALL THEY WANT.

NATE (shouting): WE’RE COMMUNICATING WITH THE ENEMY, RIGHT? IT DOESN’T MATTER. IT’S ALL BULLSHIT, YOU KNOW?

NATE (shouting): LOOKIN’ BUSY. ACTIN’ LIKE WE’RE DOIN’ SOMETHING. FOLLOWING PROCEDURE. IT’S A WAR SO WE OUGHT TO BE SHOOTING, RIGHT? WE OUGHTA HATE THEM, RIGHT? IT’S JUST A FUCKIN’ CLICHÉ.

Brian jerks slightly back, then forward. He holds still for a few seconds, then falls backwards, twisting enough that we see blood on him. Nate is utterly oblivious of this.

NATE (shouting): I’VE RACKED UP MORE TREES THAN ANYONE ELSE. (pause) YOU JUST FIRE BLIND AND HOPE YOU HIT A GOOK. FOLLOW PROCEDURE. (pause) FOLLOW EXPECTATIONS, MAN. GIVE THE BOSSES WHAT THEY WANT.

Nate continues firing, still oblivious. After thirty seconds or so of this, we fade out, and the machine gun fire stops.

Fade in. The stage is completely empty of actors, sets, and props. We have here a vision of utter emptiness. No sound is heard. The silence and emptiness of the stage should be absolute. There is only the stage lights, at normal power.

We let the audience sit for a time, hearing their own thoughts. Let them wonder. We’re not going on with the play; our protagonist is dead. The third act is that there is no third act. Whether the light is representative of an inexpressible religious experience or just spotlighting lack, we do not say.

After a few minutes, fade out. There is not more. 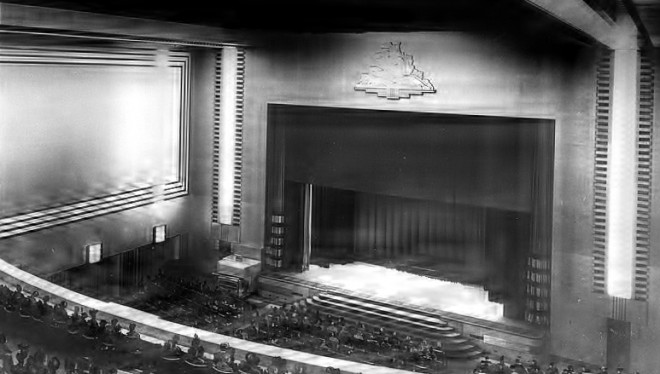